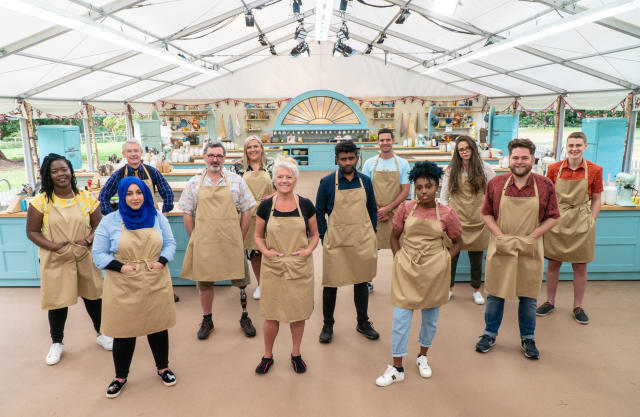 Marc has been eliminated from The Great British Bake Off after failing to impress the judges during dessert week.

The 51-year-old bronze resin sculptor, from Cornwall, did not perform well in any of this week’s challenges and one of his cakes was described as being like “concrete” by judge Paul Hollywood.

After being eliminated from the Bake Off tent, Marc, who lost his leg in a motorcycle accident in 2016, said: “I came to Bake Off to face my anxiety, to face failure, to face all those things that people are quite uncomfortable about dealing with.

“I’ve definitely learnt a bit more about myself.”

Hermine was named star baker, the second time she has earned the accolade this series.

The base needed to be made from scratch and they were given two-and-a-half hours.

Hollywood said the quarter-finals stage meant contestants had to “take it up a couple of notches,” adding it was the first time in Bake Off history this stage of the competition had been filled with star bakers.

Lucas busied himself by suggesting Bake Off could be adapted into a Broadway musical, while co-host Noel Fielding introduced viewers to a wooden spoon named Andre, complete with a face drawn on.

Dave’s citrus cheesecakes received praise from the judges, with Hollywood telling him he had “ticked all the boxes,” while Peter and Laura also impressed.

However, Hermine and Marc did not.

The technical challenge, set by judge Prue Leith, saw the bakers sent back to the 1700s and tasked with making two Sussex pond puddings, a dessert which has a lemon in the middle. The dish was first recorded in 1672.

The judges tested the puddings blind and told Laura her dish needed a bit longer in the steamer.

Security guard Dave also needed to leave his in longer, the judges said, while Hermine’s lemon was “bullet hard,” according to Leith.

Accounting and finance student Peter’s was too raw, the judges said, while Marc’s flavour was no better than “OK”.

Laura finished first but received faint praise from Leith, who said: “Laura, I wish I could say it was wonderful but it really wasn’t much better than the rest.”

Finally, the showstopper challenge tasked the bakers with making a jelly art design cake, a layered dessert. They were given four-and-a-half hours.

Marc opted to make an apple jelly with chocolate and strawberry mousse while Laura went for a “flower power” koi jelly art cake.

Dave made a Newquay beach scene cake, complete with guava and apple flavouring, and Hermine attempted a chocolate and raspberry mousse jelly cake. Peter made a snow globe jelly cake.

Laura was up first and Leith described her koi cake as “brilliant”, saying the raspberry mousse was “particularly good”.

Hollywood agreed and said it was “perfect”. He added: “Every layer is excellent.”

Moving on to Dave’s effort, Hollywood described his clotted cream mousse as “too stodgy,” however Leith was a fan and said the cake was “quite an achievement”.

Hollywood said Peter’s snow globe would have benefited from bolder colours and “more vibrancy” and criticised his sponge for being “slightly overbaked”.

Marc’s cake was overcooked and “like concrete,” according to Hollywood, and the jelly was “too rubbery”. Finally, the judges delivered their verdicts on Hermine’s cake.

Last week, 31-year-old pantomime producer Lottie was given the boot from the show after failing to impress with her ice cream cake.