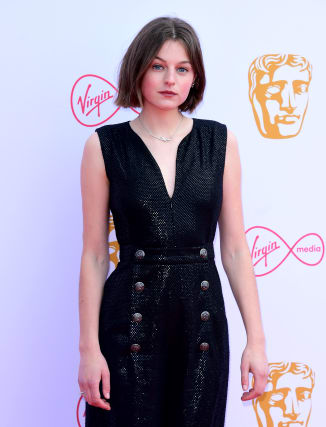 The Crown star Emma Corrin has said she feels “sorry” for the royal family, who she says are in an “impossible situation”.

The actress, who plays Diana, Princess of Wales in the upcoming fourth series of the Netflix programme, told the Radio Times she would “run a mile if anyone in the royal family asked me to marry them”.

“I’m indifferent to the royal family really, but I do feel sorry for them,” she told the magazine.

“We know what happened to Diana. It’s an impossible situation.”

Corrin, 24, said that when she was growing up there was a “running joke” at her school that her mother was Diana, after she had run away to find a normal life because she looked so similar to the princess.

“So I grew up incredibly fond of this woman, as were most of the British public,” she said.

“My mum was very affected by the tragedy of someone who was so generous with their love being taken so suddenly and unfairly.”

The actress said Peter Morgan, who writes the programme, is “unflinching about the darker sides of people”.

“Diana had been raised in a very aristocratic family and she knew the rules of the game, she knew exactly what she was doing at Balmoral when she was flirting with Philip,” Corrin said.

“She knew she was there to impress.

“She had this shyness to her that I think was authentic, but she was also naturally charming and she knew it.

“I wouldn’t go so far as to say she was manipulative, but almost.”

The fourth series of The Crown will launch on Netflix on Sunday.

It is set in the late 1970s and will follow Diana’s relationship with the Prince of Wales, played by Josh O’Connor.