Who are the stars heading to Wales for I’m A Celebrity…Get Me Out Of Here? 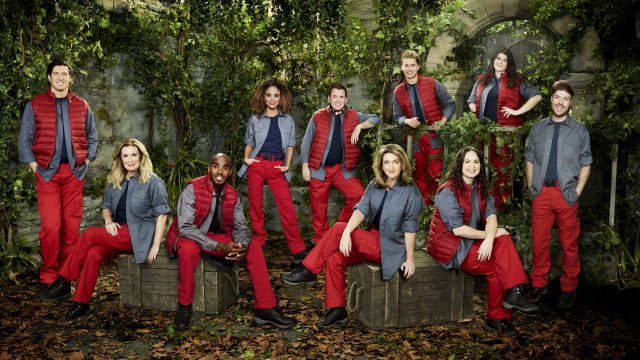 A host of stars will be braving the cold and rain as I'm A Celebrity...Get Me Out Of Here! will be filmed for the first time in the UK.

The new series, which is taking place at Gwrych Castle in Wales rather than the usual location in the Australian jungle due to coronavirus restrictions, will begin on November 15.

Here is a look at all the stars who have signed up for this year's series:

The long-distance runner is the most successful British track athlete in modern Olympic Games history.

He was knighted by the Queen at Buckingham Palace in 2017.

Asked if he will feel under enormous pressure to do well in the trials, he said: "I think there will be a lot of pressure but hopefully it should be good.

"I know the eating trials involve yucky stuff but you just have to hold
your nose and crack on."

He also co-hosts the advice podcast Help I Sexted My Boss along with etiquette expert William Hanson.

He said: "I have got so many phobias and fears. I am worried I will let people down but I also want to give the trials my best go.

"I hope Radio 1 listeners will get behind me."

After it was leaked that the show would be axed, the journalist said she was "absolutely devastated".

She has also presented Newsnight and BBC Panorama and is the regular host of BBC News at Nine on BBC One and the standard edition of BBC World News.

In August 2015 Derbyshire announced on Twitter that she had been diagnosed with breast cancer and would be having a mastectomy.

She said: "I will find it difficult not knowing what is going on in the news but there is nothing I can do about that.

"But it will be absolutely surreal. I keep up with the news minute by minute every day and suddenly there will be a void, but that is also quite thrilling because we will have to fill it by finding out about each other and working as a team. It will be a digital detox."

Since then Kay, who is married to Strictly Come Dancing presenter Tess Daly, has hosted shows including All Star Family Fortunes, Beat The Star and Splash!, The Whole 19 Yards, Home For The Holidays, Let's Get Gold and 1000 Heartbeats.

He said: "Mainly I am doing it for my daughters, Phoebe and Amber.

"It's a show they watch on a regular basis and they get behind the people in the camp. I think the fact I am involved in it will make it even more fun for them.

"And now it is approaching, they are so excited. Every time I talk about it, I get a double fist pump from them and they are thrilled to be involved."

The author and podcast host is best known for her parenting content, Happy Mum, Happy Baby, which is a hit non-fiction book and podcast, in which she interviews famous mothers including the Duchess of Cambridge.

She has also written novels Billy and Me, You're the One That I Want, Dream a Little Dream and Always with Love.

Her brother is The Only Way Is Essex star Mario Falcone and she is married to McFly star Tom Fletcher, with whom she has sons Buzz, Buddy and Max.

She said: "Years ago we started doing a runner bean challenge which is based on I'm A Celebrity.

"It's where we pretend we are doing an eating trial but actually we are eating our vegetables really fast. Challenges like this find a way of becoming part of the family dynamic and I can't wait to do this."

The soap star has played Coronation Street's Liz McDonald on and off since 1989.

Before that she had made a brief appearance on the cobbles in 1984 as Gail and Brian Tilsley's friend June Dewhurst.

Callard has also appeared in Emmerdale and played Flo Henshaw in Two Pints Of Lager And A Packet Of Crisps.

She said she has been asked many times before to take part in I'm A Celebrity, but decided to take the plunge after making the decision to leave the soap earlier this year.

She added: "I felt that after 31 years Liz had run her course. And normally, I would have said 'thank you but no thank you'. But this year, I decided to go for it. Doing I'm A Celebrity is an adventure and definitely out of my comfort zone."

The former Strictly Come Dancing star, the brother of Love Island star Curtis Pritchard, joined the BBC's flagship entertainment show in 2016, when he was paired with Olympic gymnast Claudia Fragapane.

Before that he auditioned for the seventh series of Britain's Got Talent in 2013, along with his partner Chloe Hewitt, and reached the semi-finals.

He said: "I am unbelievably competitive and whatever the challenge is, I will go for it. I will give everything 110%.

"I really appreciate life and I never take anything for granted. I will be
trying to come back with all the stars every single time and if I don't, I think I will be disappointed."

The Paralympic gold medallist and F46 javelin thrower was the youngest member of the Great Britain athletics team at the 2008 Paralympic Games in Beijing, when she was 14 years.

Arnold, who has a congenital limb deficiency, took up the sport aged 11 at Cleethorpes Athletics Club in Grimsby.

She won her gold medal at the 2016 Summer Paralympics in Rio de Janeiro with a world record throw of 43.01 metres.

She said: "I don't want it to be about my disability. Yes I have a missing arm and I am in the Paralympics but I want to show people nothing stops me and it shouldn't stop anyone else either.

"I hope by going on the programme, it inspires people. I want people to look and see that I am scared but I am giving it a go."

The singer-turned-actress joined EastEnders in March 2019 as Chantelle Atkins and made headlines as her character was subjected to long-term mental and physical abuse at the hands of her husband, Gray Atkins (Toby-Alexander Smith).

She said: "I have got all the phobias. When my friends see me too, they are going to say 'what the hell? This doesn't make sense."

"But I keep having to tell myself that it is good to face your fears."

He also starred in the spin-off Redwater, about Alfie and his wife Kat Slater, played by Jessie Wallace.

He said: "Six hundred calories a day is like a slice of cake on a Sunday. But I have got to go straight back in the West End to play a drag queen in a dress and so I will look great.

"To make the kids proud would be so nice. They were too young for the height of Alfie Moon and they have only seen daddy dressed as a drag queen."

I'm A Celebrity...Get Me Out Of Here! begins on ITV on November 15.