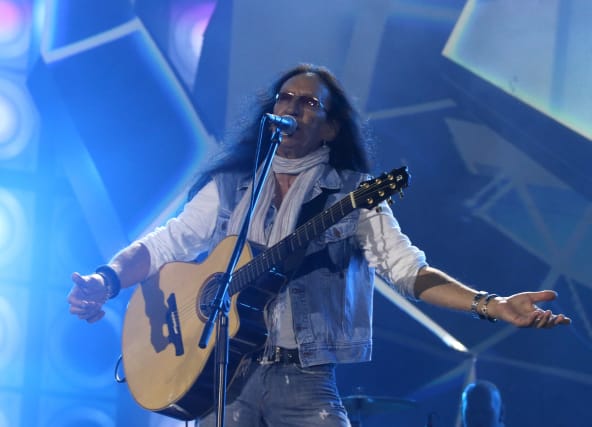 Former Uriah Heep keyboard player Ken Hensley has died at the age of 75.

The London-born musician, who played in the rock band between 1970 and 1980, died “peacefully” on Wednesday evening following a short illness.

He will be cremated in a private ceremony in Spain, where he lived on a remote farm with his wife, Monica.

A statement from his management said: “It is with great sadness that we announce that Ken Hensley, former Uriah Heep vocalist, songwriter and multi-instrumentalist passed away peacefully on 4th November following a very short illness.

“Hensley was one of the most important musicians of the past half-a-century. His work with Uriah Heep in the 1970s helped to make the band hugely influential.

“He also collaborated with bands such as Blackfoot, W.A.S.P. and Cinderella, as well as building a very successful solo career.

“As a writer he was responsible for such classics as Lady In Black, Easy Livin’, July Morning and Look At Yourself.

“A very spiritual person, Hensley became an inspiration to many and known for encouraging talented artists.”

Hensley’s former bandmate, Mick Box, said: “I am in deep shock at the news Ken Hensley has passed away, and my sincere condolences go to his family and wife Monica.

“Ken wrote some amazing songs in his tenure with the band, and they will remain a musical legacy that will be in people’s hearts forever. RIP Ken.”

Hensley’s brother, Trevor, who is also a musician, said in a post on Facebook that he is “devastated”.

“I am writing this with a heavy heart to let you know that my brother Ken Hensley passed away peacefully on Wednesday evening,” he wrote.

“His beautiful wife Monica was at his side and comforted Ken in his last few minutes with us.

“We are all devastated by this tragic and incredibly unexpected loss and ask that you please give us some space and time to come to terms with it.

“Ken will be cremated in a private ceremony in Spain so please don’t ask for information about a funeral.

“Ken has gone but he will never be forgotten and will always be in our hearts. Stay safe out there.”

Hensley was born Kenneth William David Hensley on August 24 1945 in Plumstead, south-east London, but grew up in Stevenage, Hertfordshire.

In late 1969 he joined guitarist Box and singer David Byron in the rock band Spice.

A year later they changed the name to Uriah Heep after the sycophantic character in Charles Dickens’ novel David Copperfield.

Hensley wrote or co-wrote the majority of their songs during their ’70s heyday, helping to craft a sound which combined progressive and heavy rock styles, often with a dominant keyboard sound.

His compositions included the hit singles Lady In Black, Easy Livin’ and Stealin’, although he left at the end of the decade unhappy with their new musical direction.

He then played with Blackfoot and John Lawton before forming his own band, Ken Hensley & Live Fire, releasing their first live album in 2011.

Hensley took part in a number of impromptu reunions with his former Uriah Heep bandmates over the years, often at the Uriah Heep Annual Convention.

He had recently finished work on a new project, My Book Of Answers, which is due for release in February 2021.

He leaves behind his wife, Monica, his two brothers, Trevor and Mark, and his sister, Dawn.