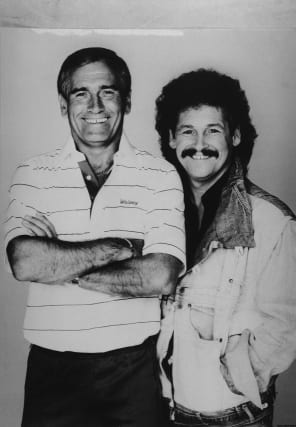 Tommy Cannon is to narrate an ITV documentary celebrating the life and work of his long-time comedy partner Bobby Ball.

Ball, who performed alongside Cannon as Cannon & Ball, died in hospital on October 28 aged 76 after testing positive for Covid-19.

Titled Rock on, Tommy – The Bobby Ball Story in reference to his famous catchphrase, the 30-minute documentary will chart Ball’s rise from factory welder to household name.

The programme, created by Leeds-based Wise Owl Films, will bring together clips from across the years and will be voiced by Cannon, Ball’s showbusiness partner of some five decades.

Cannon said: “I’m heartbroken to have lost my best pal and comedy partner, but I’m so pleased that ITV are going to mark his career with this celebration – it will be nostalgic and emotional for all of us who knew Bobby, and for all the fans out there who felt like they did.”

“Some viewers still fondly remember classic moments from the 1970s and 80s when Bobby brought a new type of comedy to our screens, alongside Tommy.

“A new generation might know him better as a fine actor, in shows like Not Going Out and Mount Pleasant.

“Bobby’s story is an incredible one and we’re honoured to have been asked to make this tribute to one of Britain’s most loved and most versatile entertainers.”

He was known for twanging his braces on stage and declaring: “Rock on, Tommy!”

Ball later won over new fans playing Lee Mack’s troublesome father Frank in the BBC One sitcom Not Going Out from 2009.

The show will air later this month.