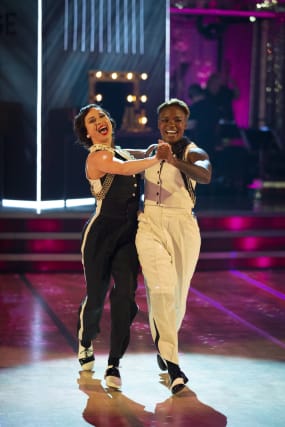 Nicola Adams and Katya Jones will dance a jive to Greased Lightnin’ during movie week on Strictly Come Dancing.

The Olympic boxer will take a turn around the dancefloor to the track from Grease.

Reality star Jamie Laing, who narrowly escaped elimination at the weekend, will perform a charleston to Zero To Hero from the Disney film Hercules with his partner Karen Hauer.

Radio 1 DJ Clara Amfo and her partner Aljaz Skorjanec will perform a tango to Lady Marmalade by Pink, Mya, Lil’ Kim and Christina Aguilera from Moulin Rouge, while EastEnders actress Maisie Smith and Gorka Marquez will attempt an American Smooth to Into The Unknown from Frozen II.

Actress Caroline Quentin and Johannes Radebe will do a couple’s choice dance to Everything’s Coming Up Roses from Gypsy, while Ranvir Singh and Giovanni Pernice will foxtrot to Love You I Do from Dreamgirls.

Comedian Bill Bailey and his partner Oti Mabuse, who won the show last year with Emmerdale actor Kelvin Fletcher, will do a paso doble to The Good, The Bad and The Ugly theme, while singer HRVY and Janette Manrara will cha cha to Sir Elton John and Kiki Dee’s Don’t Go Breaking My Heart from Gnomeo and Juliet.

Former NFL star Jason Bell and Luba Mushtuk will also take on a paso doble, this time to the Star Wars theme, while JJ Chalmers and Amy Dowden will foxtrot to Raindrops Keep Falling On My Head from Butch Cassidy And The Sundance Kid and The Wanted singer Max George and Dianne Buswell will do a couple’s choice dance to The Simpsons theme from The Simpsons Movie.

Former home secretary Jacqui Smith was the first star to waltz off the dancefloor on Sunday, alongside her partner Anton Du Beke.