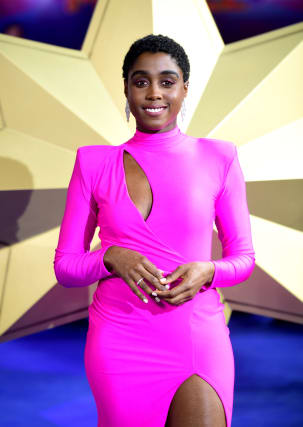 Lashana Lynch has said she sees her role in Bond film No Time To Die as a step in the right direction for gender equality.

She told Harper’s Bazaar: “We’re moving away from toxic masculinity, and that’s happening because women are being open, demanding and vocal, and calling out misbehaviour as soon as we see it.”

Lynch added it was important to represent a truthful black experience, saying: “A character that is too slick, a cast-iron figure? That’s completely against what I stand for.

“I didn’t want to waste an opportunity when it came to what Nomi might represent.

“I searched for at least one moment in the script where black audience members would nod their heads, tutting at the reality but glad to see their real life represented.

“In every project I am part of, no matter the budget or genre, the black experience that I’m presenting needs to be 100 per cent authentic.”

She added: “As I have come more into myself, I have found ways to remain respectful of others but still true to myself.

“If something felt misrepresented or inaccurate – for example, the dynamic between a mother and her child, or the way we might wrap our hair to sleep at night… I had to learn to speak up.

“I’ve been cast to tell an authentic story, so that’s what I’m going to do.”

Lynch also spoke of the profound experience of making the film in Jamaica, where her parents are from, saying: “(It has given me) a deeper understanding of what I’ve chosen to do, of the people I do it for.

“Understanding the privileges as a British-born Jamaican that my parents and grandparents gave to me because they came to England. In a way, it serves as a ‘thank you’ to them for making the sacrifice.”

The December issue of Harper’s Bazaar is on sale from November 5.