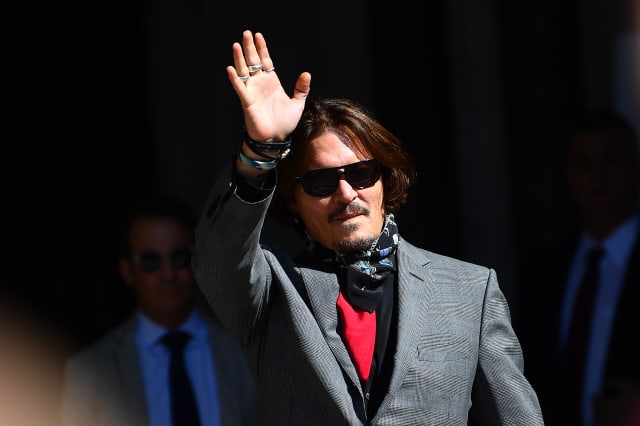 For over three weeks in July, Johnny Depp’s action against The Sun newspaper gripped fans the world over.

Here are key highlights and revelations from the biggest English libel trial of the 21st century:

The first day of the trial saw Mr Depp take the stand for the start of what would be five days in the witness box.

The actor was quizzed about his Hollywood lifestyle, his use of drink and drugs, his attitudes towards women and his friendships and associations with a raft of famous names, including Rolling Stones guitarist Keith Richards, writer Hunter S Thompson and musician Sir Elton John.

Mr Depp’s barrister, David Sherborne, outlined the star’s case, saying in documents before the court that The Sun’s article had made “defamatory allegations of the utmost seriousness” against the star.

He said the articles amounted to “a full-scale attack on the claimant as a ‘wife-beater’, guilty of the most horrendous abuse”, adding Mr Depp’s position was clear – that former wife Amber Heard’s allegations “are complete lies”.

Mr Depp’s second day on the stand saw him cross-examined about a number of allegations of domestic violence – all of which he denied.

He was questioned about claims he hit Ms Heard for the first time in early 2013 after she laughed at his “Wino Forever” tattoo.

The Pirates Of The Caribbean star also claimed Ms Heard’s allegations of domestic abuse were a “hoax”, accusing the actress of “building a dossier” against him “that appears to be an insurance policy for later”.

Mr Depp describes his relationship with Ms Heard as “a crime scene waiting to happen”.

The actor faced further intense questioning about the actress’s allegations of violence, including a trip to Australia, when it is alleged he assaulted her and “completely destroyed” a house in a drink and drug-fuelled binge.

The actor severed his finger during the three-day trip, which he said happened when Ms Heard threw a vodka bottle at him – a claim denied by Ms Heard.

Mr Depp tells the court he has never before been accused of hitting a woman.

The star continues to be cross-examined over incidents in which he is alleged to have been violent towards Ms Heard, which he denies, and also faces questions about the couple’s tempestuous relationship and his drug use.

He says he thought what became known as the “defecation incident” – in which faeces were found in the couple’s bed – was a “fitting end to the relationship”.

The court also briefly went into private to consider evidence relating to Ms Heard’s allegations of sexual violence. The exact nature of the allegations was not disclosed.

After around 20 hours in the witness box over five days, Mr Depp, 57, finishes giving his evidence.

The court hears about allegations of violence during a row between the couple after Ms Heard’s 30th birthday party in April 2016, just hours after Mr Depp had learned during a “bad” business meeting that he had lost 650 million US dollars (£514 million).

The court hears from four former or current employees of Mr Depp.

They include Mr Depp’s security guard, Malcolm Connolly, who gives evidence about the Australia trip and says he never saw the star attack Ms Heard.

Hilda Vargas, Mr Depp’s LA housekeeper of more than 30 years, is asked about the “defecation incident” in April 2016

She says she was “horrified and disgusted” to find “a large pile of faeces” in the bed – and that “it was clear to me” that it was human faeces “because of the size”.

The other witnesses are Tara Roberts, Mr Depp’s estate manager in the Bahamas, and Samantha McMillen, Mr Depp’s stylist since 2002 who also worked for Ms Heard during the couple’s relationship.

Kevin Murphy, Mr Depp’s former estate manager, gives evidence about an incident in October 2015 which led to Ms Heard facing criminal proceedings in Australia for taking her and Mr Depp’s dogs into the country illegally.

Johnny Depp’s former partners Vanessa Paradis and Winona Ryder show their support for the star, describing the allegations against the actor as “impossible to believe”.

The women – who both say Mr Depp was “never violent or abusive” to them – were due to give evidence but neither is called to do so.

However, their witness statements are released to the media.

Ms Ryder says in her statement that her experience with Mr Depp was “wildly different” to the one depicted by Ms Heard, 34, and said she finds the “horrific” allegations “impossible to believe”.

And Ms Paradis, who was in a relationship with Mr Depp for 14 years and has two children with him, says she has known him for more than 25 years and describes him as “a kind, attentive, generous, and non-violent person and father”.

The court also hears from Mr Depp’s head of security, Sean Bett, and Starling Jenkins, who provides security services to the star.

The court hears from more witnesses, including artist Isaac Baruch, a long-standing friend of Mr Depp, who claims Ms Heard made “fraudulent” allegations of domestic violence against Mr Depp to “extort and blackmail him”.

Actress and #MeToo activist Katherine Kendall claims she was “completely misquoted and misused by The Sun”.

She says that, after reading the April 2018 article, “I immediately understood that The Sun’s purpose was to present the appearance of a #MeToo backlash”.

Other witnesses to give evidence include Travis McGivern, a member of Mr Depp’s security team, Alejandro Romero, a concierge at the Eastern Columbia Building in Los Angeles, and Ms Heard’s former interior designer Laura Divenere.

Ms Heard begins giving evidence in the trial, saying she feared Mr Depp was “going to kill me”.

The 34-year-old claims the Edward Scissorhands actor threatened to kill her “many times, especially later in our relationship”, and would blame his actions on a “self-created third party” he called “the monster” – who she said she was “terrified of”.

In a witness statement, she accuses Mr Depp of verbal and physical abuse, including screaming, swearing, punching, slapping, kicking, headbutting and choking her, as well as “extremely controlling and intimidating behaviour”.

She also alleges he was “extremely jealous” and accused her of having affairs with stars including Leonardo DiCaprio, whom he nicknamed “pumpkin-head” after Ms Heard auditioned with him, and her Magic Mike co-star Channing Tatum, whom Mr Depp is said to have called “potato-head”.

The actress insists she was “never violent” towards her ex-husband and would only “try to defend” herself when he “got serious”.

On her second day giving evidence, Ms Heard claims she heard a “rumour” that Mr Depp pushed Kate Moss down the stairs.

She is asked about the “stairs incident” in Los Angeles in March 2015 – the date of an allegation on which Ms Heard alleges she believed Mr Depp was going to push her sister, Whitney Henriquez, down the stairs.

Ms Heard tells the court she “did strike Johnny that day in defence of my sister”, saying: “He was about to push her down the stairs and, the moment before that happened, I remembered information I had heard (that) he pushed a former girlfriend – I believe it was Kate Moss – down the stairs.

“I had heard this rumour from two people and it was fresh in my mind.”

On her second day in the witness box, Ms Heard also faces questioning over her relationships with actor James Franco and Tesla founder Elon Musk, as well as the infamous “defecation incident” – saying the suggestion she was involved in leaving faeces in the bed is “absolutely disgusting”.

Ms Heard is asked about her allegations of violence against Mr Depp during a visit to Australia in March 2015.

She alleges Mr Depp was responsible for severing his own finger and denies it was caused by her throwing a bottle in his direction”.

The actress is also asked about an alleged incident of domestic violence in Los Angeles in December 2015, which she described in a witness statement as “one of the worst and most violent nights of our relationship”.

Ms Heard tells the court she had been “so in love” with Mr Depp and had “always held out hope” that he would “get clean”.

On her fourth and final day in the witness box, she says the actor was a “remarkable man” when he is “clean and sober”, but said that “other side of him was a monster”.

She answers more questions about her allegations of domestic violence.

Ms Heard’s sister Whitney Henriquez gives evidence that she saw Mr Depp punch Ms Heard “really hard in the head … multiple times” in Los Angeles in March 2015, and admits Ms Heard punched Mr Depp on that occasion, but only did so “in my defence”.

A bombshell video which Mr Depp’s lawyers say shows Ms Heard “assaulted” her sister is played to the High Court.

Ms Henriquez is questioned about the video, which Mr Depp’s lawyers say was sent by an “anonymous source” the previous night, after Ms Henriquez gave evidence that her sister had never attacked her.

The Hollywood star’s legal team claims the video demonstrates Ms Henriquez was “lying” in her evidence and had “tailored” her testimony “to meet her sister’s evidence”.

Ms Henriquez tells the court that the video shows her and her friends “referencing a verbal argument my sister and I had got into the night before.”

She says her friends were “inferring, trying to make a storyline, albeit a bad one, interesting, nothing more”.

The trial enters its closing stages, with lawyers for The Sun telling the court there is “no doubt” that Mr Depp “regularly and systematically abused his wife”.

The Pirates Of The Caribbean actor has “spent his entire adult life doing exactly what he wanted” and was “not about to answer to a woman at this stage in his life”, it is alleged.

Sasha Wass QC, for News Group Newspapers, tells the court: “Having heard all the evidence in this case and all the supporting evidence of the incidents of violence, we suggest that there is no doubt that Mr Depp regularly and systematically abused his wife.

“The characterisation that he is a wife-beater is entirely truthful.”

The final day sees lawyers for Mr Depp argue that the star has lost “nothing less than everything” as a result of “appalling allegations” that he was violent to Ms Heard.

It is important to the actor to clear his name, his lawyers tell the court, saying: “This is not about money, this is vindicating him.”

David Sherborne, barrister for Mr Depp, accuses NGN and executive editor Dan Wootton of “acting as both judge and jury”, saying the article was “not researched at all”, and that it was presented in a “deliberately and wholly one-sided manner”.

He also launches a stinging attack on Ms Heard, accusing her of being a “compulsive liar”.

As the day draws to a close, Ms Heard stands on the steps of the Royal Courts of Justice in London, saying she stands by her evidence and would “place her faith in British justice”.