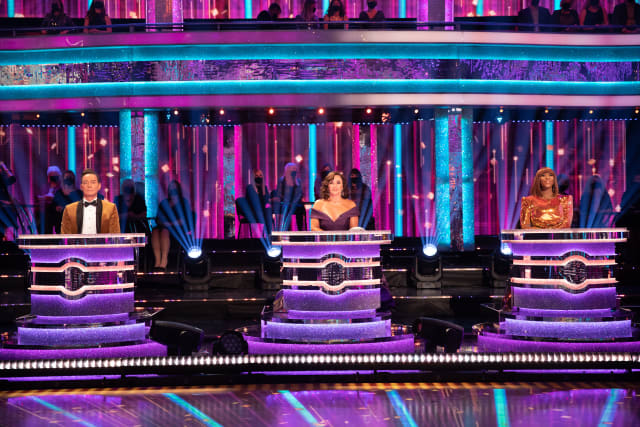 Jacqui Smith has become the first celebrity to depart the dance floor on Strictly Come Dancing.

The former home secretary, 57, faced reality TV regular Jamie Laing in the dance-off on Sunday night after failing to impress the judges or secure the public vote.

Smith scored just 25 across two weeks of live shows, while Laing finished with 31.

Both couples performed their routines again, with Laing and his professional partner Karen Hauer reprising their American Smooth to Night And Day by Frank Sinatra.

Smith and Anton Du Beke performed a samba to Help Yourself by Sir Tom Jones.

Revel Horwood said: “Based purely on dance merit and what I thought was the better dance of the evening, I’d like to save Jamie and Karen.”

“I just have to say that for me personally I think that one couple was a little bit on a higher level so I’m going to save Jamie and Karen.”

The ballroom dancer, 54, has often been partnered with celebrities unlikely to find success on the show.

Speaking after being eliminated, Smith said: “I had the greatest adventure it’s possible to imagine.

“I’m just sorry I can’t continue it with this man who has been absolutely fantastic and gorgeous to be with.

“But I don’t feel too much shame in losing to these guys because they are a fantastic bunch of dancers, they really are.

“So I’ll be watching you and supporting you.

“To Anton I would like to say you have been just an absolute joy to be with.

“I am so pleased and proud to have spent this time with you.

“And to everybody on the programme I don’t think people realise just how brilliant the team is that put this programme together and if ever we need Strictly, we need it now so thank you so much.”

Du Beke added: “Well I’ve loved every second of being in the studio with you.

“We have laughed, you have a shocking sense of humour I can’t begin to tell you.

“You are just the best and I’ve loved it.

“Thank you from the bottom of my heart.”

Bruno Tonioli was absent as he is in the US working on Dancing With The Stars, though he is expected to return later during the series.

Saturday’s show saw viewing figures shoot up from last week with an average of 10.6 million tuning in, the BBC said.

This was compared with last Saturday’s episode which attracted an average of 9.3 million viewers, meaning the flagship show saw an increase of 1.3 million.

The dancing series followed a press conference shown on BBC One during which Prime Minister Boris Johnson announced a new month-long lockdown for England.

The remaining 11 couples will take to the dancefloor next week for a movie-themed week.