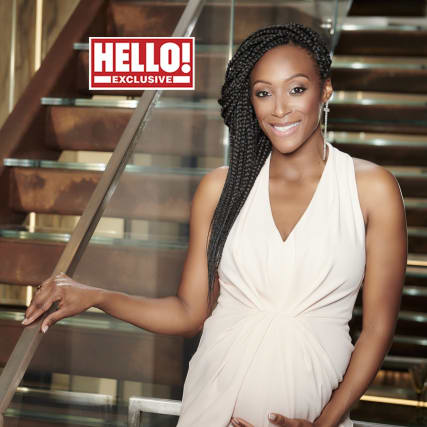 Coronation Street actress Victoria Ekanoye has revealed she is pregnant with her first child with boyfriend Jonny Lomas.

The actress, best known for playing Angie Appleton in the ITV soap, is six months pregnant and due to give birth in January.

Ekanoye starred in Coronation Street between 2017 and 2019 when Angie returned to South Africa with her son George.

Speaking to Hello! magazine, she said: “We thought we would try next year. So when this pregnancy came along we were like: ‘It’s happening.’

“It did come as a bit of a surprise but it’s so unbelievably exciting.”

The couple decided to wait to announce the news partly due to Ekanoye suffering with sickle cell anaemia, a genetic blood cell disorder.

She said: “We know friends that have miscarried and so we waited until we were 12 weeks before we even told our parents.

“Then, with my health condition, we wanted a little bit more security and stability in knowing that everything is okay with baby and with me.”

Ekanoye, who competed on The X Factor: Celebrity in 2019, was diagnosed with sickle cell anaemia when she was 22.

She added: “Chronic illness in general is not easy to live with but to have that during Covid-19 and to be pregnant was a lot.

“As I have sickle cell, this is regarded as a high-risk pregnancy but the team at St Mary’s Hospital in Manchester are amazing and I see my sickle cell specialist, my obstetrician and my midwife every month and they really look after me.”

The couple have chosen a planned hospital birth, with Ekanoye likely to be induced around week 39.

She said: “It has to be in hospital so that it’s in a controlled environment. They will have blood on standby as I will need a transfusion straight after the birth.”

Lomas added: “I am super excited as well as a bit nervous. It’s a new chapter in our lives, all my friends who have kids say it’s going be hard but the best thing you will ever do.”

Read the full interview in Hello! magazine, out now.