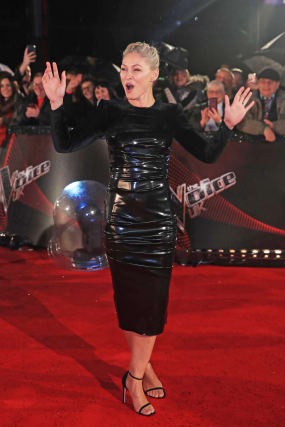 The Voice UK has returned to TV screens after a seven-month break amid the coronavirus pandemic.

The ninth series of the show, in which acts are judged blind and compete for a record deal, was halted as Covid-19 spread across the UK in March.

Host Emma Willis welcomed viewers back on Saturday night with a catch-up episode featuring profiles of the eight semi-finalists.

Fans watched as the 44-year-old highlighted their past performances, from their first blind audition to their knockout shows.

Doug Sure, an electrician from south London, was chosen as this year’s lifeline act.

He will return to the show as the ninth contestant after being saved in a public vote.

Sure auditioned with Childish Gambino’s Feels Like Summer, and was chosen by Will.i.am for his team, before performing U2 and Mary J Blige’s One during the battle stage.

Sir Tom Jones, Olly Murs, Will.i.am and Meghan Trainor will be back in the show’s famous red chairs to coach the acts.

Earlier this month, it was announced that pop star Anne-Marie will replace Trainor as a coach on the show in 2021.

Trainor stepped down from the show after one series following the announcement that she is expecting her first child with husband Daryl Sabara.