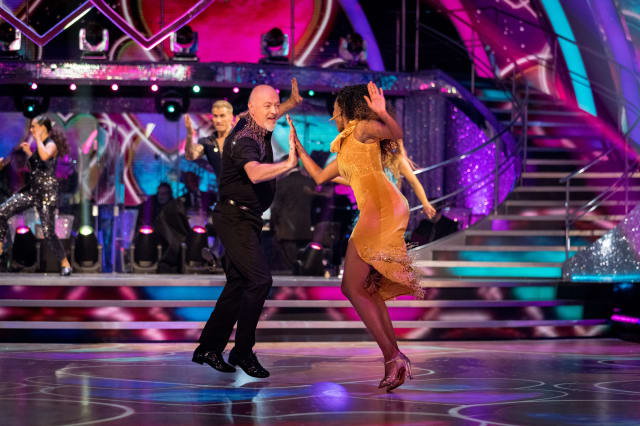 Strictly Come Dancing began a few minutes later on Saturday night after relegating Boris Johnson to another BBC channel so viewers could get their dancing fix.

The popular dancing series followed a press conference on BBC One during which the Prime Minister announced a new lockdown for England.

Co-host Tess Daly opened the show saying: "On a tough night we are going to try our very best to keep you entertained."

The Wanted's Max George and Dianne Buswell were the first couple to take to the dance floor as they performed a jive, scoring 20 out of a possible 30.

The first celebrity dancer will be eliminated on Sunday night.

Fans had earlier voiced their concerns on social media that Strictly would not start on time.

Match Of The Day host Gary Lineker quipped on Twitter: "If this runs any later Boris Johnson could be in a Strictly dance-off."

Comedian David Baddiel added: "If this announcement holds up Strictly we may finally have a revolution."

The delay also caused the semi-final of Little Mix The Search to be postponed until next week.

The talent show, in which bands compete for a place on the pop group's 2021 tour, was knocked from the schedule and will now air as part of a "big final event weekend".

A statement on Twitter said: "Little Mix The Search has been postponed tonight for a BBC News special.

"The show will now become part of a big final event weekend, with the semi-final airing at 7pm on Friday 6th November and the final at 6.05pm on Saturday 7th November."