Portraits Of The People celebrate heroes contributing to arts in communities 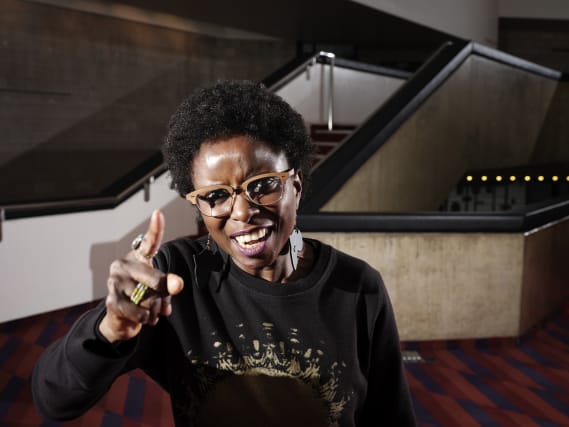 Celebrity photographer Chris Floyd has said he hopes to draw attention to unsung heroes who have contributed to the arts in their local community with a new set of portraits.

He spent two weeks driving round the UK to capture 14 people who have worked in creative industries through the coronavirus pandemic.

The photographs, entitled Portraits Of The People, include the organiser of a charity supporting children who are on the autistic spectrum through digital visual arts, the founder of a theatre company focused on telling the stories of Africans in the diaspora, and the artistic director of an organisation that gives patients and healthcare workers a programme of visual art, dance, music, film-making, creative writing, and even a clowndoctor.

Floyd told the PA news agency: “These kind of projects are so rare, where you get carte blanche to just go off and do how you want to do it, going all over the country for 10 days to photograph all these people who have done fantastic artistic things during lockdown for the benefit of their communities and people around them.

“The case studies were fantastic, things like opera, poetry, graffiti, inter-faith relations, all that kind of stuff, and from a selfish point of view it was an opportunity to go on a massive road trip around the country.”

Discussing how he navigated the trip through various tiers of restrictions, he said: “I was working so you’re not barred from doing work – I’m a photographer so I can’t work from home.

“We were quite lucky that we were in and out of places by the skin of our teeth – we got in and out of Cardiff by lunchtime on lockdown day.

“Everywhere we went the one consistent thing I noticed from people was just general confusion about what they were not allowed to do.”

He added: “Some elements were slightly farcical but we obeyed all the rules, put our masks on, stayed away from everyone. No-one wants to catch anything so they don’t want it any more than I don’t want to get it, so it becomes a self-governing exercise.”

Included in the portraits, commissioned by The National Lottery, is Abbie Canning of Q Club in Derby, which offers a creative outlet to youngsters on the autistic spectrum, and Mojisola Elufowoju, found of Utopia Theatre in Sheffield, which commissions writers and produces plays focused on telling the stories of Africans in the diaspora, dispelling stereotypes and giving visibility to overlooked narratives.

When the group’s annual Art in the Park festival was unable to take place, the group teamed up with Bletchley Park in March to host the Digital Light: Code Makers event, which saw digital and calligraphy artists, local schools, colleges and community groups break codes using algebra and create digital artworks of their own, which were later projected onto the heritage site.

Also included is actress and writer Maria Connolly of Carrickfergus, Northern Ireland, who set up the 1 Eleven Theatre Company and wrote, produced, directed and acted in The Broads, about Judy Garland, Bette Midler and Marilyn Monroe, which went on to tour care homes, assisted living accommodations, a rehabilitation unit, a mental health facility, the cancer unit at Belfast City Hospital, and the Royal Victoria Hospital.

Also in Northern Ireland, he photographed Dr Jenny Elliott, CEO and artistic director of Arts Care, which gives patients, families, staff and visitors in healthcare environments access to the arts.

Floyd said: “This group have all shown a ‘can-do’ spirit, a refusal to lay down and give up, despite their own personal and national trials this year.

“They have created work and projects specifically designed to fulfil that need for communal strength using the power of the arts.

“My aim was to document each of them in a way that showcases and honours that sense of integrity and fortitude, as well as their humour and joie de vivre.”

The National Lottery’s 2020 Portraits of the People will feature on the websites and social media of The National Portrait Gallery, London, The National Museum of Wales, Cardiff, The MAC in Belfast, IKON Gallery in Birmingham, Summerhall in Edinburgh, Ty Pawb, Wrexham, Ruthin Craft Centre in Ruthin, Wales, and The Photographers’ Gallery in London, and the portraits will also be on display at BFI Southbank in London.