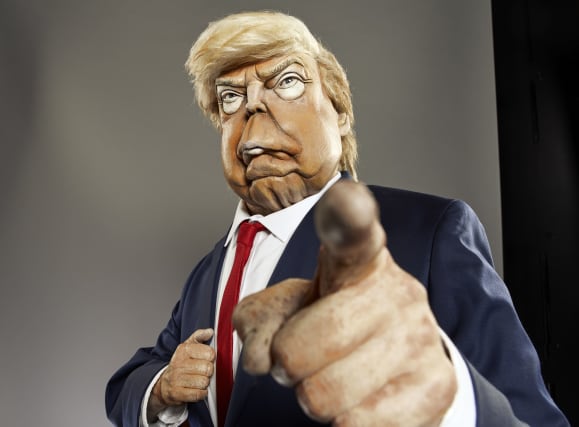 The comedian who voices Donald Trump on Spitting Image has said he sees the US president as “intellectually insecure”.

Matt Forde, who also voices Boris Johnson and Sir Keir Starmer, said he has studied the politician for years to pin down his gestures for the satirical puppet show, which will have a double episode US election special.

He told the PA news agency: “There are the big ones, the big hand movements and there’s a little facial thing that he’s been doing for years.

“He does it at the end of a point, kind of like a half smile, a kind of ‘told you so’, but slightly vulnerable.

“He’ll say things like, ‘Everybody knows that Joe is corrupt and I’ve known that for a long time…’.

“He’s got lots of different tics and really he’s the only person that can fully do him so there’s always something more to find out.

“And of course people’s voices and mannerisms change over time, as his have even in the course of his presidency, so you have to constantly watch him looking for those little things.

“You can do a general impression but it’s when you really notice the detail, that’s when it becomes a masterpiece.”

He added: “I think he’s really sensitive and I think he doesn’t feel he gets the respect he deserves and I imagine that’s quite a profound thing going back to his relationship with his father, he always feels like he’s not getting a fair deal.

“This guy is very rich, he’s the president of the United States, most people would feel like they’d achieved something.

“You get the sense he’s always trying to prove himself, so he’s very insecure, he’s intellectually insecure, so he’ll do that thing where when he’s just found out something, he’ll tell you it to impress you and you think, ‘Well, you’ve just found that out’.

“My main impression of him is that he’s deeply insecure.”

Comparing voicing Mr Trump to voicing the Prime Minister, Forde said: “I guess in a way in the show they are both idiots, but different types of idiots, so Trump is malignant but thick and nasty and rude, whereas Boris is kind of bumbling and led by (Dominic) Cummings and weak and beholden and kind of slightly naive, daft, which is so much fun.

“This guy’s in charge of the country and here we are kind of highlighting him as a total fool, there’s something really cheeky and pleasurable about that.”

Spitting Image will be on ITV this Saturday at 10pm with the first of two specials dedicated to the US election.

Both specials will be available to BritBox subscribers from Saturday morning.