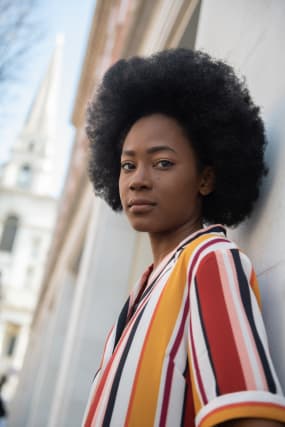 British-Nigerian poet Theresa Lola is set to write a poem to accompany a digital exhibition around Jan Gossaert’s 16th century painting The Adoration Of The Kings, the National Gallery said.

Lola’s work is connected to the character of the black king Balthasar, who scholars say is a key figure in Gossaert’s oil-on-oak painting.

The Adoration Of The Kings depicts the three kings visiting the baby Jesus.

Lola’s poem will feature in the digital exhibition Sensing The Unseen: Step Into Gossaert’s Adoration, which is set to open in December.

The exhibition has been designed as an “immersive experience” where social distancing can be maintained, the gallery said.

It will feature the voice of Balthasar speaking to visitors in a “spatialised 360 degree soundscape” before light and sound lead them to individual pods.

While in the pods, visitors will see a digital image of the painting which includes ambient sound, spoken word poetry and music.

The display will allow patrons to zoom in on the painting and help them discover previously unseen elements, the gallery said.

Scholars claim The Adoration Of The Kings is one of the great works of the Northern Renaissance. It depicts a tiny child Christ in the middle of a desolate scene of ruins.

Experts say the importance of Balthasar is highlighted by the fact Gossaert signed the painting in two places – on Balthasar’s hat and on the collar of his attendant.