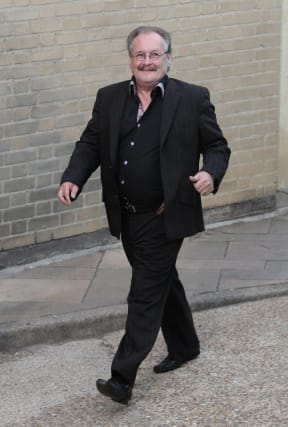 Bobby Ball has been remembered for having the “biggest heart and warmest smile that filled stages everywhere”, while his death at the age of 76 will leave the comedy community a “poorer place”.

Tributes have flooded in for one half of the comedy double act Cannon & Ball, who died after going to hospital with breathing issues and testing positive for coronavirus.

Actor and comedian Rufus Hound said Ball was “the making of my childhood Saturday nights” and recalled he was “made up” when he got to work with the duo on a radio programme.

He wrote on Twitter: “Being on stage with Cannon & Ball was like the Comedy Gods telling me ‘Well done son. You did it. You’re worthy’.

“That spark. The chaos of Bobby. Just always so on point. In a world of Oxbridge graduates controlling comedy on TV, Bobby was something more rare and more precious.

“Him and Tommy founded their double act in a factory. Proper working class boys – originally both singers who, upon finding out that the comedians got paid more, flipped to that instead.

“Everything about their shows now looks jagged and dated, but powering the whole thing was Bobby’s glittering mischief.

“One look, one pose, one stretch of those braces and he had millions right there with him. He could go from villain to hero to nightmare to victim and back again in a single sketch but you were never not with him.

“There are plenty of comedians – brilliant funny men and women – whose writing and craft is the making of them.

“But then there are the others. The ones who are sent here from another dimension to be funny in a way that defies logic or analysis. They just have ‘it’.

“Bobby Ball was the first bloke that I ever saw on telly who had that. The making of my childhood Saturday nights.

“Today the world lost someone incredibly special & I stand here now, in my kitchen, typing this through tears because 40 years later, he still means the world to me.

“If there is a heaven, he’s in it now. And if I ever get there myself, I can’t wait to clamber over the holy choir of cherubim and seraphim shouting “I know him!”

“You always knew when Bobby was in the room, he could make you laugh & cry with just a look.

“I loved you Bobby Ball and I always will, Truly truly one of a kind. sleep well cocker!”.

Comedian Jason Manford wrote: “So heartbroken to read about the passing of comedy legend Bobby Ball. Such a hilarious man. The comedy community is a poorer place without him.”

“He was a true entertainer with real funny bones. Thoughts with Tommy, Yvonne and his family at this sad time. RIP Bobby.”

His The Cockfields co-star Diane Morgan wrote: “So sad to hear about Bobby Ball. He was such a treat to work with. Never stopped making us all laugh. We’ll miss you Bobby!”

“He made me laugh more than anyone I know. He will be so missed by millions. He will always be in our hearts. Love you Bobs xxxxxx.”

Blue singer Antony Costa, who took part in I’m A Celebrity alongside Ball in 2005, tweeted: “Just heard the news about my friend and fellow I’m a celebrity contestant Bobby Ball …I’m devastated by the news. Thoughts go out to the Yvonne and the family R.I.P #bobbyball xx so so sad x”.

Meanwhile Peep Show star Neil Fitzmaurice, who starred with him on Mount Pleasant, wrote: “I’m on my way to The Sharp Project. A place we filmed Mount Pleasant at for 8 years. A place we shared love and laughter with Bobby Ball!

Their co-star Daniel Ryan added: “My pal. My teacher. My surrogate Dad. My dance partner. Not sure I can get over this. RIP Bob.”