Bobby Ball: Comedian who delighted audiences with slapstick and wordplay 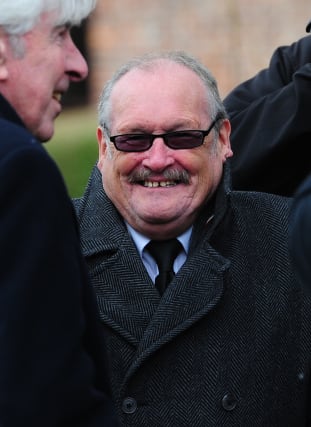 Bobby Ball – who has died aged 76 after testing positive for Covid-19 – rose from the cabaret circuit of northern England to become a household name.

As part of the duo Cannon & Ball, with long-standing partner Tommy Cannon, he delighted the nation with slapstick and wordplay.

He also forged an acting career with parts in popular TV series including Last Of The Summer Wine, Heartbeat, Mount Pleasant, Benidorm, The Cockfields and Not Going Out.

Ball was born Robert Harper on January 28 1944 at Boundary Park General Hospital in Oldham, Greater Manchester, to Bob and May Harper.

He attended High Crompton Secondary in Oldham and later went to work in a factory as a welder, where he met his long-standing partner in showbusiness, Thomas Derbyshire.

The pair adopted stage names – Bobby Ball and Tommy Cannon – and started out as comics on the cabaret circuit in the north of England.

Ball was known for twanging his braces on stage and declaring: “Rock on, Tommy.”

Their career took off in earnest after their first big show in 1979.

Primetime Saturday night series The Cannon & Ball Show ran until 1988 and was one of the London Weekend Television network’s most successful entertainment programmes.

In 1982 they starred in the film The Boys In Blue and guest starred in Eric Sykes slapstick film Mr H Is Late in 1988.

Other notable guest appearances included The Kenny Everett Show in 1982 and Shooting Stars in 1996.

However, between 1983 and 1986 the pair are reported to have not spoken to each other outside of performances and rehearsals, with Ball later blaming their falling out on “gossiping” assistants.

However, when faced with two unsuccessful sitcoms and mounting bills the pair were forced to embark on a gruelling tour schedule and set their differences aside.

During a pantomime in Bradford at Christmas 1986, Ball took the first steps to becoming a born-again Christian, with Cannon following soon after.

Some jokes made by the pair during their early career were criticised as racist, and both later expressed regret over them.

In 2005, the pair took part in the fifth series of I’m A Celebrity… Get Me Out Of Here!

Ball’s final TV appearance came in 2019 with The Cockfields, a comedy series set on the Isle of Wight, in which he played Ray.

They separated in 1970 and Ball married Yvonne Nugent in 1974, with daughter Joanne arriving in 1972.

Married for 46 years, the couple lived in Lytham, Lancashire.

Ball was patron of the local NHS Blue Skies charity and the couple recently organised a variety event which raised £30,000 towards the development of the dementia garden at Clifton Hospital in Lytham.