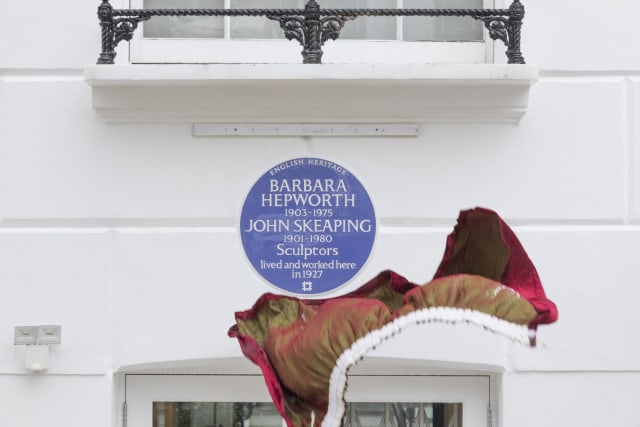 A blue plaque has been unveiled at the London home and studio of Barbara Hepworth and her first husband and fellow sculptor John Skeaping.

The pair lived together in St John’s Wood from 1927 to 1928 and held a joint exhibition in a studio at the back of the house, according to English Heritage.

Hepworth, who later moved to St Ives in Cornwall after leaving London, died in 1975.

Howard Spencer, senior historian at English Heritage, said: “Barbara Hepworth and John Skeaping’s time at 24 St Ann’s Terrace represents a significant period of artistic collaboration and we are delighted to be able to commemorate them both today.

“It was here in St John’s Wood that they both really started experimenting with materials.

“When money was short, Skeaping would collect stones and hard woods from the nearby Heath, only buying more exotic woods from dealers or stone directly from quarries when they could afford it.”

Sophie Bowness, Hepworth’s granddaughter, said: “It is very fitting that the blue plaque should jointly commemorate Barbara and John, whose work and life were fundamentally interlinked at this time.

“This is where the two young sculptors help their first exhibition in the studio and its runaway success launched Barbara’s career.

“She carved her first mature sculptures here, works such as the superb marble Doves in the collection of Manchester Art Gallery.”

Nicholas Skeaping, Skeaping’s son, said: “Perhaps John Skeaping would have told English Heritage not to bother with a blue plaque but I think he would have had an inner glow that he and Barbara should be publicly acknowledged in this way.”