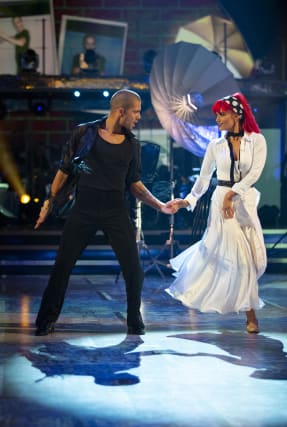 Max George has said he can “hardly walk” as rehearsing for Strictly Come Dancing takes its toll.

The Wanted star made his ballroom debut on Saturday as he performed a tango with partner Dianne Buswell.

He told ITV’s Lorraine: “It was frightening. I enjoyed it, don’t get me wrong. Waiting to go out…I went blank.”

He added: “I can hardly walk today.

“This next dance is tough, physically very challenging.”

Buswell said: “This week is completely different to the tango, we’re going to be dancing the jive to I’m A Believer by The Monkees.”

George said he has been excited to perform as jive until singer HRVY tackled the dance during the live show on Saturday.

He quickly became the favourite to win the show following his performance, which judge Motsi Mabuse declared “was the best first dance I have ever seen.”

George also discussed sending flowers to everyone in the cast, saying: “Everyone’s been so nice and the fact we’ve had to keep a distance, you’re all in the same boat, nervous, everyone gets on so well, I just thought it would be nice.

“I thought everyone was going to do it.”

Saturday night’s show saw ex-home secretary Jacqui Smith finish last on the leaderboard after taking to the dancefloor with Anton Du Beke to perform a foxtrot with top hats.

The first celebrity will get the boot on Sunday.