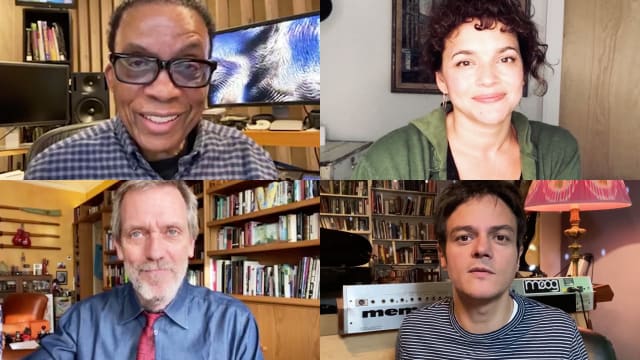 Their pre-recorded acceptance speeches were shown during the event at Ronnie Scott’s jazz club in Soho on Tuesday night.

Presented by comic Marcus Brigstocke, the 2020 ceremony was postponed from earlier this year due to Covid-19 restrictions.

It went ahead with a smaller audience and was streamed on both Jazz FM and Ronnie Scott’s Facebook page alongside special programming on Jazz FM.

Veteran keyboardist Hancock, who celebrated his 80th birthday in April, was honoured with the PPL lifetime achievement award.

Speaking from his studio, he said: “The UK has supported and kept jazz alive for so many years.

“Not just for its citizens, but globally.

“And people in distant lands, many fans from Asia, Africa and around the world have been able to enjoy great jazz in places like Ronnie Scott’s and other venues for many, many years.

“And thank you for that.”

Reflecting on his career, he added: “It has all been a wonderful ride and continues with the younger generation of jazz musicians collaborating with me and I’m inspired by that.

“They think I’m inspiring them. They don’t realise they are inspiring me. I tell them that and they dismiss that.

“But jazz is in a very healthy state. The pandemic is not going to stop that. It’s continuing beyond that.

“So I want to thank so much the Jazz FM Awards and OANDA for this wonderful honour. Thank you all so very, very much.”

She said: “I am really pleased to accept the impact award from my friends in the UK at Jazz FM. I so appreciate it.

“2020 has been a tough year for every one and music has helped a lot of people through, including me.

“I appreciate this and I wish you guys all the best.”

Jones, the daughter of sitar player Ravi Shankar, shot to fame with her 2002 debut album Come Away With Me.

A host of famous faces from the world of jazz, including Jamie Cullum, Hugh Laurie and Robert Glasper, presented awards remotely.

The gold award was presented to UK band leader and vibraphonist Orphy Robinson for his services to UK jazz and jazz education.

Earth, Wind & Fire vocalist Philip Bailey was named soul act of the year, veteran US saxophonist Charles Lloyd was awarded the international act of the year prize and Binker Golding was instrumentalist of the year.

The innovation award went to the Jazz re:freshed record label and venue of the year was won by The Vortex in east London.

Nick Pitts, content director at Jazz FM, said: “That we were able to put an event like this together in such tumultuous times is a reflection of the excellent work and will of our team at Jazz FM, Ronnie Scott’s Jazz Club, Serious, Ben Lloyd-Evans Productions, Baxter PR and our various partners and sponsors.

“It also displays the strength and resilience of the jazz community as a whole and hopefully provides a much-needed boost to everyone who works within it.

“I’m incredibly proud of what we’ve achieved here and congratulations to all of our incredibly worthy winners.”