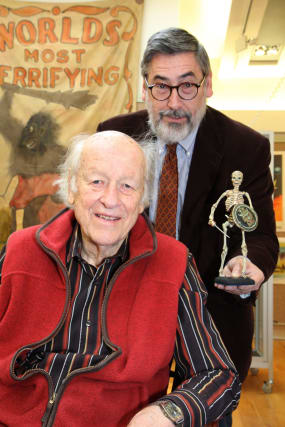 A new exhibition is to open in Edinburgh which will give an insight into the work of an Academy Award-winning filmmaker and special effects creator.

Ray Harryhausen: Titan of Cinema opens at the Modern Two, in the Scottish National Gallery of Modern Art, on Saturday to celebrate the stop motion animation expert’s creations from the 1950s to the 1980s.

Said to have inspired the likes of Peter Jackson, George Lucas, and Steven Spielberg, his films included Jason And The Argonauts, One Million Years BC, Mighty Joe Young and the Sinbad films of the 1950s and 1970s.

The exhibition is in collaboration with the Ray and Diana Harryhausen Foundation to celebrate what would have been the artist’s 100th birthday year.

His wife Diana was also the great-great-granddaughter of Scottish explorer David Livingstone.

Vanessa Harryhausen, their daughter and trustee of the foundation, said: “Our plans to celebrate Dad’s centenary at the National Galleries in Edinburgh are so exciting.

“If he was still around, he would be so enthused by all the centenary celebrations and plans.

“It’s wonderful that we are able to display so much of Dad’s collection – the space at the galleries gives us great scope to display as many of his models and artworks as possible, as well as personal items which have never been exhibited before.”

The exhibition originally scheduled for May was delayed due to the coronavirus pandemic, with it now leading the reopening of the Modern Two gallery.

It will go on an extended run until September 2021, with visitors able to book tickets up to three months in advance.

Simon Groom, director of modern and contemporary art at the National Galleries of Scotland, said: “We are delighted to open Mod Two with the largest ever exhibition devoted to Ray Harryhausen.

“His creative vision, and ability to realise scenes of enduring dramatic and imaginative power, are as relevant now as they have ever been.

“The exhibition promises to transport all visitors, young and old, into the amazing world of one of the greatest innovators of special effects in the history of cinema.”