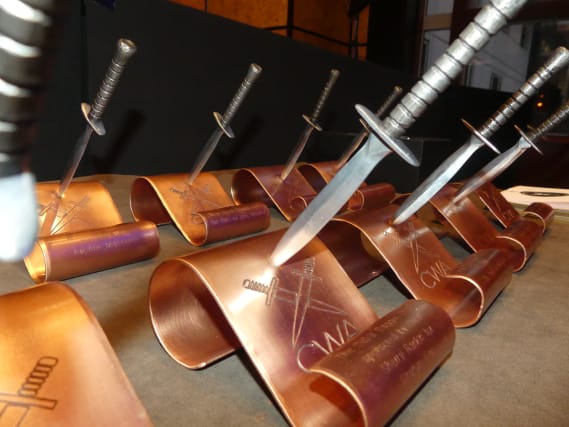 Michael Robotham has won the top prize at the Crime Writers’ Association Dagger Awards for a second time.

The Australian author and journalist, 59, was honoured with the gold dagger for Good Girl, Bad Girl, about forensic psychologist Cyrus Haven’s investigation into a mysterious young woman.

The gold dagger was created in 1955 and is awarded to the best crime novel by an author of any nationality.

Robotham was previously awarded the gold dagger for Life Or Death in 2015.

Lou Berney missed out on the top prize with November Road but was highly commended by the judges.

However, his book, a poignant crime novel set against the assassination of John F Kennedy, won the Ian Fleming steel dagger for best thriller.

The winners were announced during a virtual ceremony on Thursday evening, hosted by writer and reviewer Barry Forshaw and featuring guest speaker Richard Osman.

The accountant turned crime writer was inspired to become an author after watching Lee Child on breakfast TV say he started writing aged 40.

The ALCS gold dagger for non-fiction was awarded to Casey Cep, a staff writer at the New York Times, whose first book Furious Hours: Murder, Fraud And The Last Trial Of Harper Lee was well received on both sides of the Atlantic.

Linda Stratmann, chairwoman of the CWA, said: “The winners, and all those who were in contention for a dagger, are, as always, to be commended.

“One thing the pandemic and lockdown has taught us is the value and importance of books and storytelling – for escapism and comfort and for our wellbeing.

“Books have always been the conduit to other worlds and into other lives.

“They let us know we are not alone, so our 2020 virtual awards feel even more significant as many vulnerable people are in enforced isolation and we are all socially distancing.

Forshaw said: “The CWA Dagger Awards are the most prestigious prizes in crime fiction, and this year has furnished a particularly strong set of books and authors.

“Nothing dampens the excitement of the daggers – not even pandemics.”

The CWA was founded in 1953 by crime writer John Creasey to support and promote the crime genre and its authors.