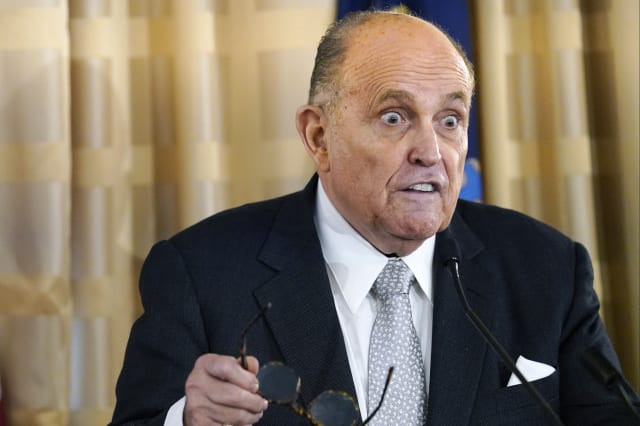 Donald Trump ally Rudy Giuliani has described a video clip from the upcoming Borat film appearing to show him with his hand down his trousers as a "complete fabrication".

Mr Giuliani, a former New York City mayor and the president's personal lawyer, said he was tucking his shirt in after taking off recording equipment following an interview.

He said at no point was he ever inappropriate.

Mr Giuliani appears in the upcoming Borat sequel, starring British comedian Sacha Baron Cohen, while being interviewed by an actress playing Borat's daughter, who is reportedly posing as a TV journalist.

After a clip from the film was shared on social media, Mr Giuliani tweeted: "The Borat video is a complete fabrication.

"I was tucking in my shirt after taking off the recording equipment.

"At no time before, during, or after the interview was I ever inappropriate.

"If Sacha Baron Cohen implies otherwise he is a stone-cold liar."

Mr Giuliani said he called the police in July after "I realised it was a set up" and said the incident was "an effort to blunt my relentless exposure of the criminality and depravity of Joe Biden and his entire family".

Mr Giuliani has been behind stories published in the US media about Mr Biden's son Hunter.

Borat features Baron Cohen as the titular intrepid reporter and follows his misadventures across the US.

As with much of Baron Cohen's other work, the humour often derives from the comedian catching out unwitting subjects in mock interviews.

The sequel, titled Borat Subsequent Moviefilm, will be made available on Amazon Prime Video on October 23.