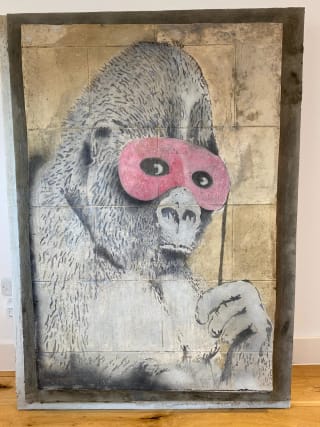 An early Banksy artwork has been removed from the wall of a community centre in Bristol and put up for auction.

The piece, Gorilla In A Pink Mask, appeared at the former social club in the elusive artist’s home city in 2001.

It was painted over in 2011 after being mistaken for graffiti by the building’s owner.

Last month, the piece was removed from the Jalalabad Islamic Centre in the Eastville area of the city by street art restoration company Exposed Walls.

Saeed Ahmed, owner of the centre, now plans to sell it at auction to raise funds to invest back into the Bristol community.

“The reason for selling is because the building is falling to pieces and we wanted to safeguard the piece,” Mr Ahmed said.

“We are also giving money back to local charities in the Bristol area.”

The artwork, also known as Glitter Gorilla, measures 5ft (1.5m) by 2.ft 7in (0.8m) and is described by Exposed Walls as an “aerosol on concrete piece” .

It depicts a gorilla holding a pink masquerade mask.

A spokesman for Exposed Walls said: “This was a project to help furnish the mosque as well as donate money to several charities on behalf of Exposed Walls and the Jalalabad Islamic Centre.

“It’s very important to us that the money goes back into the community.

“Art enriches lives and it’s a part of our mission to ensure that it is well looked after and all restoration was intricately done.”

Bids are open online for the piece, which is bring auctioned on November 17, on the Exposed Walls website.