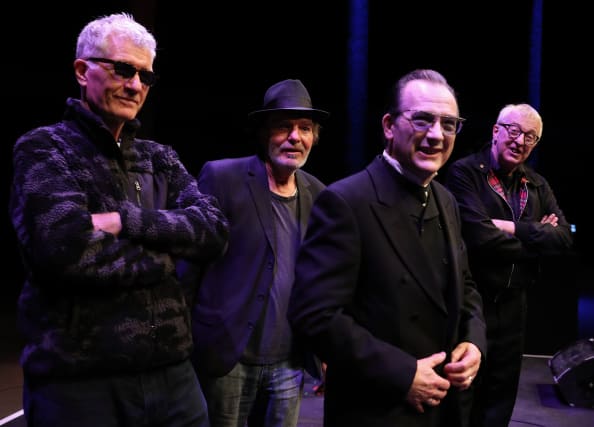 Punk veterans The Damned have reunited their original line-up for a tour next year.

Their comeback comes on the eve of the 44th anniversary of their influential first single New Rose being released.

The band, all now in their 60s, will play four headlines shows in London, Birmingham, Glasgow and Manchester in July, featuring tracks from their first two albums as well as covers.

Speaking about their decision to reform, Vanian told the PA news agency: “When you work with people you are always thinking about those kinds of things. We have all been working separately as well.

“Sometimes the time doesn’t present itself or there are differences in the band or whatever. Now is the perfect time, weirdly, because we are celebrating tomorrow 44 years of the first New Rose single.

“When we very first started the word punk hadn’t been coined really. They talked a little bit about the American bands. I remember the first interview I did was with (music magazine Sniffin’ Glue) and he said, ‘What’s the band?’, and I said, ‘A bit MC5-ish, a bit Stooges, a bit garage bands’.”

Vanian added: “Punk came along. It was an insult at first, then everyone embraced it because, hell, you are calling us crap but we are better than you think.”

After forming in 1976, The Damned supported Sex Pistols on their infamous Anarchy Tour of the UK before going on to play with T. Rex on Marc Bolan’s final tour before his death.

The Damned have undergone numerous personnel changes over the years but never matched the critical success of their original line-up.

Speaking during the press conference announcing the news, Rat Scabies said: “Because we weren’t a uniform band we didn’t all wear the same clothes and we were always four individuals.

“We were not a uniform punk band and I think a lot of people of our generation didn’t understand that what we really did was exploit the true freedom of punk, which was to do what you wanted.

“I didn’t care whether you wore a tutu or a cloak. What difference does it make to me? It’s not my right to say and it’s nobody else’s either.

“But I don’t think it did us any favours with the fashion scene.”

Tickets are available from AEG Presents from Friday at 10am.