Giant tampon on show at the British Library 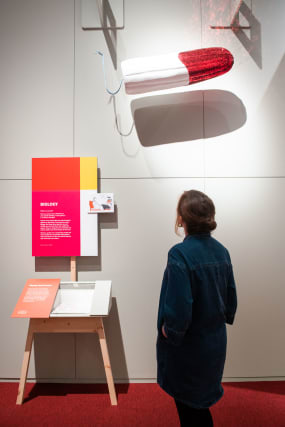 A giant tampon is going on show at the British Library.

The sequin-decorated “glampon” is one of several items in a new exhibition on the fight for women’s rights.

Exhibition curator Debbie Cox said the exhibition demonstrates the “rich history of women’s campaigning and the way women have fought with passion, imagination, tenacity and humour”.

And she said of the “glampon”, which is around a metre long: “It’s a lovely fun, glittery, quite amazing item, with a serious purpose behind it…

“It’s very striking and breaks down barriers so that women can discuss issues that have been loaded with fear, shame and all sorts of negative connotations for something that is entirely natural.”

The “glampon” was created by artist Sam Dawood for workshops by the charity Bloody Good Period.

The Good Place actress Jamil smashed her weighing scales in response to a body-shaming meme. She has given the British Library new scales for the exhibition.

Other objects include records of surveillance carried out on Sophia Duleep Singh, who “supported campaigns for women’s suffrage in the UK and was a “favourite goddaughter” of Queen Victoria.

The exhibition will also feature protest poems penned on toilet paper in Holloway Prison by Sylvia Pankhurst, who was imprisoned for seditious activity.

Also on show is a first edition of Jane Austen’s debut novel, Sense And Sensibility, which was anonymously published, with her authorship only revealed after her death.

Visitors will also see a first edition of Mary Wollstonecraft’s A Vindication Of The Rights of Woman, one of the founding works of feminist philosophy, and a Handmaid’s costume worn in recent women’s marches, as seen in The Handmaid’s Tale.

A 1924 letter written by a woman with a violent husband, to campaigner Marie Stopes, describes an urgent need for birth control.

Cox said the exhibition comes with a warning, as some of the exhibits are “harrowing”.

“We can’t avoid the fact that women are subject to violence and there are some emotive issues,” she said.

The British Library said the exhibition “features the stories of women, gender non-conforming people and trans people who have long defied expectations about who they are, how they should behave, and what they can achieve”.

Unfinished Business: The Fight for Women’s Rights runs from Friday until February 21 next year.