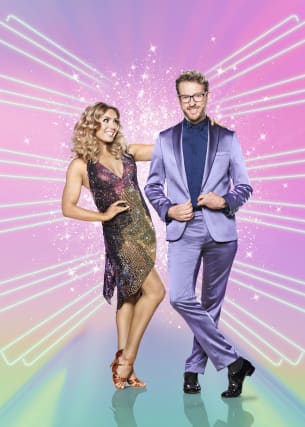 Strictly Come Dancing stars JJ Chalmers and Amy Dowden have opened up on how their health battles have helped them form a unique bond since being paired on the show.

TV presenter Chalmers was serving as a Royal Marine in Afghanistan when he was injured by a bomb blast in 2011.

Dowden, his professional dance partner on Strictly, has suffered from Crohn’s disease since she was a child.

The pair appeared on Monday’s The One Show and opened up on how their health struggles have brought them closer together.

“We totally understand each other in so many different ways,” Dowden said.

“The producers walked in the other day and we were talking about where we have our drips put in at the hospital.

“I think we’ve both overcome a lot and (are) quite determined characters to both be where we are on Strictly Come Dancing today.”

Chalmers, an Invictus Games medallist, said he is inspired by Dowden.

“It’s far more about the mindset,” he said.

“Whenever I hear Amy speaking about what she’s had to put up with, about how she’s driven forward to just become the best at what she does, that’s entirely what I want to do with my life.

“So it moves beyond everything that held me back and actually just look at the possibilities. And that’s what this whole process is about, doing what you can do rather what you can’t.”

Dowden praised Chalmers for refusing to allow his injuries to hold him back on Strictly.

The pair will dance a waltz during the first live show on Saturday.

This year’s Strictly stars are living in “bubbles” due to the pandemic and Chalmers said it is a “privilege” to be involved.