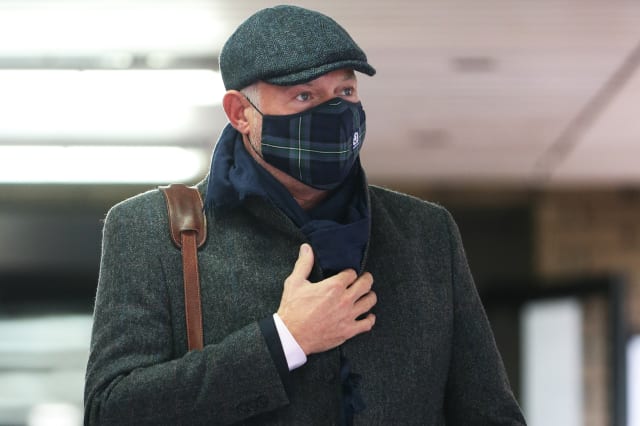 Former Blue Peter presenter John Leslie has been cleared of grabbing a woman's breasts at a Christmas party.

Leslie, 55, had been accused of groping the woman after shaking hands with her at the gathering in London's West End more than a decade ago.

But a jury of nine men and three women at Southwark Crown Court returned a not guilty verdict on Monday after just 23 minutes of deliberations, following a week-long trial.

Leslie became tearful and rubbed his eyes before nodding in thanks towards the jury after the verdict was given.

The Scot had told the jury he could not remember being at the party, and described the single allegation of sexual assault from December 5 2008 as "crazy" and "ludicrous".

Giving evidence, he said: "I would not have touched her like some mannequin and walked off."

He told the jury he had previously been made out to be an "aggressive, sexual monster" by the tabloid press, as he denied ever assaulting any woman, saying it is "not in my nature".

Leslie said his life changed completely in 2002 when he was wrongly identified on live television as the unnamed alleged rapist in his former girlfriend Ulrika Jonsson's autobiography.

Presenter Matthew Wright later apologised, saying he named him in error, the court was told.

Ms Jonsson has never made any complaint to police, the jury heard.

Leslie, from Edinburgh, said there had never been any sexual assault allegations against him before his name was wrongly linked to the book, and described the fallout as "Armageddon".

He said the tabloids were "gunning for me", adding "they decided I was their man", and there had been "adverts for women to come forward with allegations".

In 2003, two charges of indecent assault against him made by one woman were dropped, and not guilty verdicts recorded at the same London court where he faced trial this year.

The court also heard he was arrested and interviewed by police in 2008 regarding an allegation of rape and indecent assault said to have happened in 1995, but there was insufficient evidence to charge and no further action was taken.

After Monday's verdict, Judge Deborah Taylor said: "Mr Stott, you for the second time leave this court without a stain on your character and I hope it will be the last time you have to attend."

Appearing under his full name John Leslie Stott, he told the jury he had become reclusive, paranoid, depressed and suicidal amid the allegations, saying: "I lost everything."

He was supported during the trial by friends and former Blue Peter colleagues Anthea Turner, Diane Louise Jordan, Yvette Fielding and ex-This Morning co-host Fern Britton, all of whom gave character references.

Turner said he was "absolutely adored" by women who worked with him and "incredibly respectful", while Britton said the allegation did not "sound like the man that I know in the slightest".

His father Les Stott attended every day of the trial, and the men hugged after he left the dock.