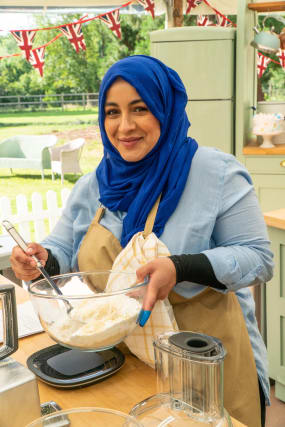 Great British Bake Off contestant Sura has admitted she was “heartbroken” after controversially knocking another amateur baker’s cakes on to the floor.

The pharmacy dispenser from London, who was eliminated this week, swatted at a fly but sent security guard Dave’s miniature upside-down pineapple cakes flying during the first episode of the Channel 4 series.

A tearful Sura, 31, went on to win the technical challenge – the first of the series – with her own cakes, while Dave, 30, placed ninth, with the judges looking only at the two cakes which did not fall.

Addressing the incident on spin-off An Extra Slice after exiting the tent in the fourth week, Sura said: “How to describe it… I was heartbroken for Dave. I was actually praying that Dave would win.

“To me it was just, I had knocked it over, please God, let him win so he feels a little bit better.”

Guest panellist Steph McGovern added: “I feel bad now because I totally thought you did it on purpose.”

Sura replied: “You and half the nation. It’s fine.”

She also admitted to having nightmares about Bake Off judge Paul Hollywood after botching a chocolate babka on this week’s episode.

She said: “I had a nightmare and I woke up at 3 o’clock and I was like, ‘That went really badly’.

“I had numerous nightmares while we were in the hotel and prior to that I used to have nightmares about Paul kicking me out because I overslept and I didn’t turn up. Honestly.

“It was terrifying because you live, breathe and eat cake. That is literally our life.”

Sura was the fourth amateur bake to be axed from the tent.