Kate Hudson tells Gwyneth Paltrow about her worst on-screen kiss: 'He just had snot all over his face' 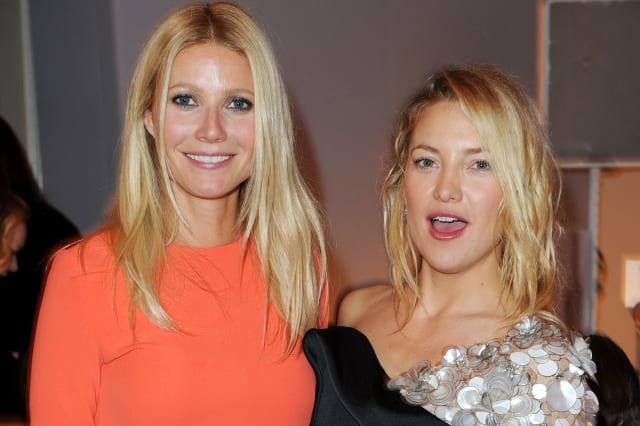 When close friends Gwyneth Paltrow and Kate Hudson get together for a chat, you know it's gonna be good. Paltrow interviewed the Fabletics founder on her Goop podcast and the women had a lot to say on the topic of on-screen kisses.

"Who was the best on-screen kisser?" Paltrow asked Hudson.

"Honestly, you know, I feel like I kind of haven't had the best kissers," Hudson replied. "I feel like I should have had better ones."

One name came to mind, though: Matthew McConaughey.

"The thing is, every time I kiss McConaughey, it's like, I mean, it's like there's just something happening and there's, like, snot or wind," Hudson laughed. The pair shared the screen together in rom-coms How to Lose a Guy in 10 Days and Fool's Gold.

"Like when we were kissing in the end of Fool's Gold, we're in the ocean, we like had the plane crash — he just had snot all over his face," Hudson recalled.

"Also you've worked with him so much, do you have, like, brother energy towards him?" Paltrow asked.

"I mean, yeah I think it can be a little sibling-y at times, but no..." Hudson continued.

The Goop founder interjected that she had a "brother energy" issue when it came time to kiss Robert Downey Jr. in the Iron Man and Avengers films.

"When I kissed him and I was like, 'You've got to be kidding me,'" Paltrow shared. "This is literally like kissing my brother."

"Oh, you know who was a good kisser, but you didn't see it, cause they cut it out? Was Billy [Crudup]," Hudson said of her Almost Famous co-star. "Billy was good. That was good."

"He looked like he would be a good kisser," Paltrow exclaimed.

"We had a kissing scene in the ice room which then wasn't in the movie," Hudson shared of the 2000 film.

Paltrow concluded with one final question for her pal: "Is there a famous person that you've had a thing with that the world does not know about?"

"Oh yeah," Hudson quickly replied. "What do you mean? Yeah. Doesn't everybody? If they said no, they're lying. Come on... I mean, it's amazing the things you do get away with."

'Animaniacs' returns with Hulu show after 22 years off the air

'The Amazing Race' Competitor Faces Her Fear of Heights in Circus Challenge: WATCH!