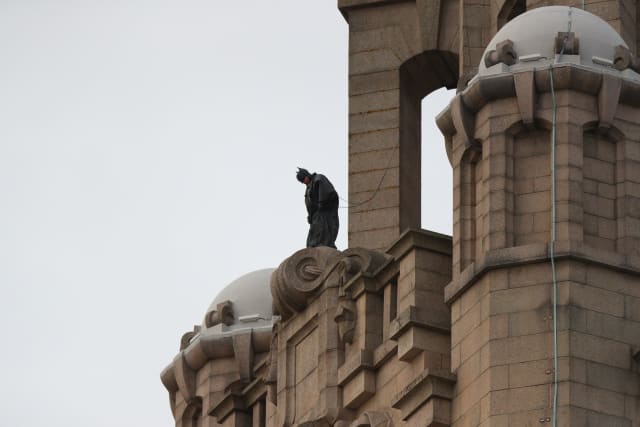 A stunt double dressed as Batman has been pictured on top of the Royal Liver Building in Liverpool.

Filming of The Batman, which stars Colin Farrell and Robert Pattinson, is continuing in the city despite stringent coronavirus restrictions.

The stuntman, who was secured with a wire, was seen leaning off the famous landmark on Thursday.

Production on the film began in Glasgow earlier this year, but was halted due to the pandemic.

It resumed months later but was suspended again as a precaution against coronavirus.

Filming continues in Liverpool after the Prime Minister launched the three-tier system of local alert levels for England on Monday, with the Liverpool City Region placed in the “very high” risk category from Wednesday.

A Liverpool City Council spokeswoman previously told the PA news agency: “The new restrictions in Liverpool do not currently impact on filming in the city region.

“The Film Office is working closely with every single production to ensure Covid-safe measures are in place and are being adhered to in accordance with rigorous industry protocols.”

The Batman, directed by Matt Reeves, will see Pattinson, 34, follow in the footsteps of actors including Christian Bale, Ben Affleck, Val Kilmer, Michael Keaton and George Clooney in playing the Dark Knight.

Mouthwash could 'inactivate' human coronaviruses that cause infections