Dali painting valued at up to £10 million to be auctioned 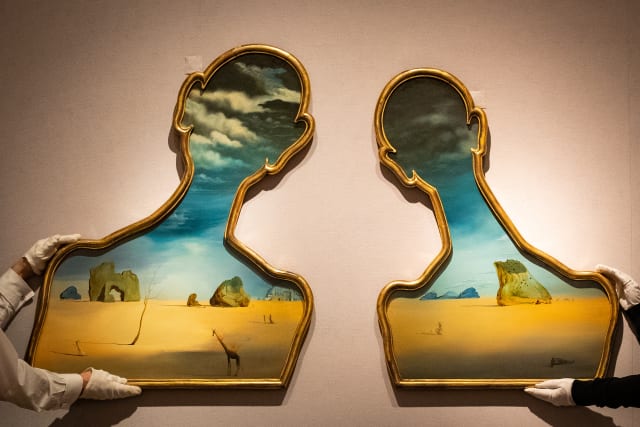 A surrealist painting by Salvador Dali has been displayed ahead of being auctioned.

His 1937 work Couple Aux Tetes De Pleins Nuages is valued at between £7 million and £10 million by auction house Bonhams.

The painting depicts Dali and his wife Gala with the outline of its frames, while the picture shows a desert landscape.

It will be auctioned on Thursday as part of a sale of impressionist and modern art by Bonhams.

“It is full of the highly personal imagery that made Dali perhaps the most exciting member of the surrealist group during these years of experimentation, revealing his obsession with Freudian psychology as much as his obsession with his great lover and muse Gala.

“While the now famous image of the girl skipping was employed by Dali to symbolise childhood memories, the burning giraffe represents ‘the masculine cosmic apocalyptic monster’, a timely premonition of war.

“Dali painted these monumental panels at a time of intense personal discovery and expression, while the world around him erupted into conflict.”

Other works that are to be auctioned in the sale include Ephebus by Ossip Zadkine and Leonard Tsuguharu Foujita’s Femme Allongee, Youki, which are both valued at £500,000 to £700,000.