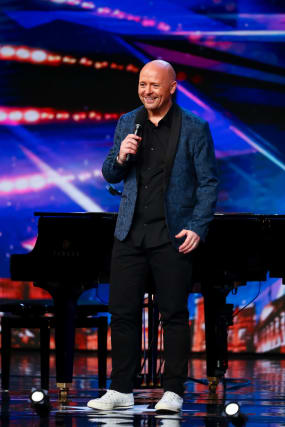 Jon Courtenay has been crowned the winner of Britain’s Got Talent 2020.

The 47-year-old comedian from Manchester, who was Ant and Dec’s golden buzzer pick during auditions, came out top in the public vote after a musical comedy performance that tackled community and the Covid-19 pandemic.

Signing choir Sign Along With Us took second place, while variety performer Steve Royle was in third.

Courtenay fought off competition from a total of nine other acts to win £250,000, as well as a spot on the bill at the Royal Variety Performance.

After his name was announced, he revealed that he had written a song that morning which he planned to perform at the show.

Courtenay said: “I have tried not to think about it because I am really bad at hiding disappointment. This morning, for the first time, I woke up with a song for the Royal Variety Performance.

“I wrote it down but I didn’t want to think it was a sign because that would have been too much pressure.”

All 10 acts pre-recorded their performances the night before for safety reasons – but the winner was announced live.

Amanda Holden stood in as head judge for Simon Cowell as he recovers from a back injury, after falling off an electric bike he was testing at his house in Malibu.

Five other finalists were voted through by the public.

They were announced at the start of the episode as father and son magic duo James and Dylan Piper; magician Damien O’Brien; choir Sign Along With Us; and magicians Jasper Cherry and Aidan McCann.

Unusually for the show, five of the 10 finalists featured magic heavily in their act.

Ant and Dec kicked off the final on ITV, explaining that some acts had created “bubbles” ahead of their final performances.

Royle, a 52-year-old comedian from Chorley, performed a routine to Lust For Life by Iggy Pop.

Referring to comments attributed to the Chancellor about the cultural sector amid the coronavirus pandemic, he quipped: “If Rishi Sunak is watching this. Some of us can’t possibly be retrained.”

Holden said their performance was “extremely polished” and that it made her “really miss” theatres while they remained closed due to coronavirus restrictions.

He addressed the number of complaints the show was hit with following Diversity’s Black Lives Matter-inspired performance, and the toppling of the Edward Colston statue in Bristol.

Earlier in the series, the Diversity routine sparked more than 24,000 complaints to broadcasting watchdog Ofcom.

Dancer and magician Magical Bones, 38, delivered a performance that incorporated the story of Henry Box Brown, a 19th century US slave who escaped by stowing himself inside a wooden crate, before becoming a magician in later life.

Sign Along With Us, a signing choir from Manchester ranging from the ages of four to 64, were next up and received the loudest cheer of the night.

Walliams, who used his golden buzzer on them earlier in the series, said: “I couldn’t be prouder. It was magic. You saved the best for last,” before adding: “I would love to see you win this.”

The companies of Les Miserables – The Staged Concert, The Phantom Of The Opera and Mary Poppins also performed a medley of songs from their shows.