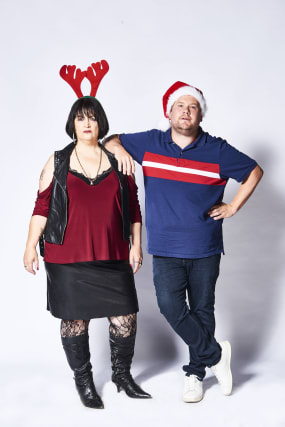 Gavin & Stacey fans could one day find out whether Smithy agrees to marry Nessa, according to co-writer Ruth Jones.

Jones said the “door is closed but it’s not locked” on further episodes of the hit BBC comedy, which she wrote with Corden, who now hosts The Late Late Show in the US.

She said there are currently no plans to put the West family, from Barry Island in South Wales, and the Shipman family, from Essex, back on television.

The hugely successful Christmas special drew an audience of 18 million people and was the most-watched comedy show of the last decade.

Jones was speaking at the Cheltenham Literature Festival to promote her new novel, Us Three, which tells the story of three women over decades of friendship.

Asked whether there would be further episodes of Gavin & Stacey, Jones replied: “Your guess is as good as mine, that’s the truth.

“All I can say is there are no plans at the moment, but then I say that and people go ‘Yeah, but you used to say that before and then you did suddenly announce…’

“I am telling you the truth – there are no plans at the moment to write any more. But, as I said to somebody the other day, the door is closed but it’s not locked.

“I don’t think it’s a case of us kind of going ‘We’re never going to do any more’ but it is a case of we really just don’t have the space.”

Jones lives in Cardiff with her husband, David Peet, and three stepchildren, while Corden is based in the US.

“How do we get together to do it? He’s not in my bubble. I’m not about to get on a plane to LA. But you know, who knows, who knows,” Jones said.

The actor and writer said she was overwhelmed by the reaction to the Christmas special.

“I continue to be surprised by people’s love for the show. It’s absolutely incredible and such a huge compliment,” she said.

“A lot of people said to me before it went out that they don’t watch telly on Christmas Day but were going to watch Gavin & Stacey.

“That was a huge compliment to me and James because it meant the people sitting down with the people they lived with, whether it was their families or friends, neighbours.

“James and I actually watched it together – my husband was there and James’s wife, and we watched it with some of James’s family.

“James’s family didn’t know what was going to happen at all and when it got to the final moment when Nessa proposed, James’s younger sister, Ruth, just went ‘Noooooooooo…’

“It was a lovely moment to experience that.”

Jones said she and her husband are currently writing two screenplays, one a comedy and the other a drama, in which she will appear.

“I have to be careful what I say because the process is quite a long one and you can’t announce anything until it’s been greenlit and all that kind of stuff,” she said.

“There are plans afoot.”