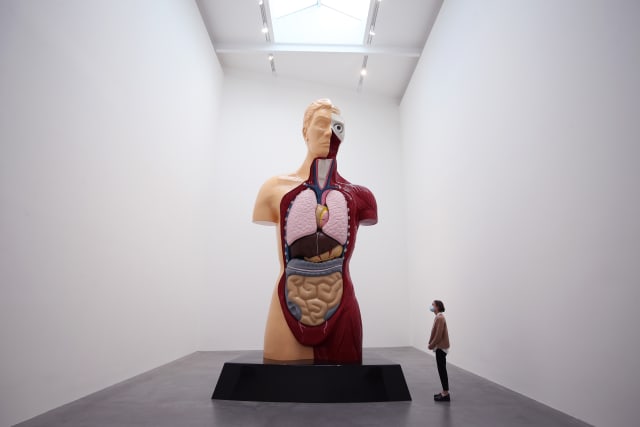 An exhibition of early works by Damien Hirst, including a shark in formaldehyde and a 20ft bronze sculpture, has gone on display in London.

The retrospective, titled End Of A Century, features more than 50 artworks spanning the 55-year-old’s formative years as a student in the 1980s to his work as a leading contemporary artist during the 1990s.

It will be open to the public at Newport Street Gallery from October 7 to March 7.

End Of A Century includes some of Hirst’s best known series, including Natural History, Spin Paintings and Medicine Cabinets.

Works which have not been exhibited before include Art’s About Life, The Art World Is About Money, from 1998, which depicts an auction house scene in a glass and steel case.

Up, Up And Away from 1997 shows three ducks suspended in formaldehyde, while Waster from the same year is a vitrine filled with medical waste.

Hymn, a 20ft painted bronze sculpture, was inspired by an anatomical model belonging to his son

The 1999 piece has become one of his most recognisable works.

Hirst’s work over the years has also included butterfly collages and spin paintings as well as more controversial creations.

The Bristol-born, Leeds-raised artist came to attention in 1988 when he was a student at Goldsmiths, University of London, where he conceived and curated the group exhibition Freeze.

Artworks from this period also feature in the show, including his early Spot Paintings, which became one of his most recognised motifs.