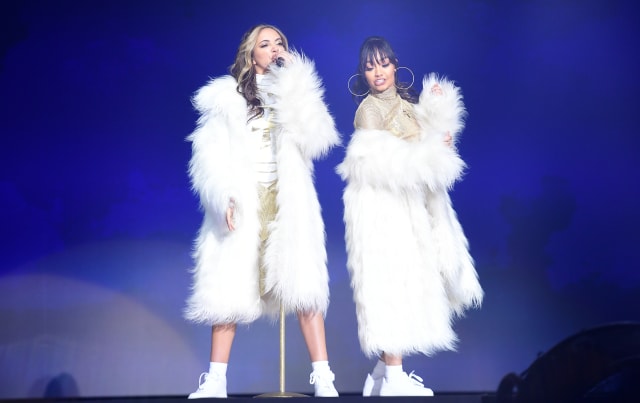 Little Mix stars Jade Thirlwall and Leigh-Anne Pinnock could be honoured for their support of the Black Lives Matter movement.

Both singers are nominated for the inspirational personality gong at the Ethnicity Awards 2020 after attending anti-racism protests in London earlier this year.

They will compete against stars including actress and activist Jameela Jamil, Stars Wars actor John Boyega and Game Of Thrones star Nathalie Emmanuel.

The annual ceremony recognises figures, brands and charities who have worked to advance equality and opportunity for Bame groups.

Founder of the Ethnicity Awards, Sarah Garrett, said: “Jade and Leigh-Anne are inspirational role models and are very deserving of their nominations.

“They stood up and spoke out on behalf of black and minority ethnic communities during a time of racial turbulence.

“All of the celebrities, public figures, business and brands on the shortlist, have all used their platforms to shine a light on the issues facing (the) marginalised in what has been a pivotal and poignant year so far.

“All of those nominated have done important work to advance equality and promote opportunity for all against the backdrop of the international Black Lives Matter movement and are incredibly deserving of this recognition.”

Manchester United striker Marcus Rashford is nominated for sports personality of the year, after his high-profile campaign to end child food poverty in the UK.

Rashford is joined by fellow footballer Trent Alexander-Arnold, Lewis Hamilton and Anthony Joshua on the shortlist.

The media moment award recognises events that have helped to change the public’s perception.

Amal Fashanu, alongside her ex-footballer father John, runs the Justin Fashanu Foundation and the Black Heart clothing label, which promotes activism through fashion.

Amal, who is nominated for the online impact award, said: “The Ethnicity Awards are more important than ever before.

“2020 has been an incredibly challenging year for the black and minority ethnic communities and shows there is still so much work to do to secure full racial equality for all.”

This year’s winners are expected to be announced in December.

Arnold Schwarzenegger feels 'fantastic' after heart surgery: 'I have a new aortic valve'