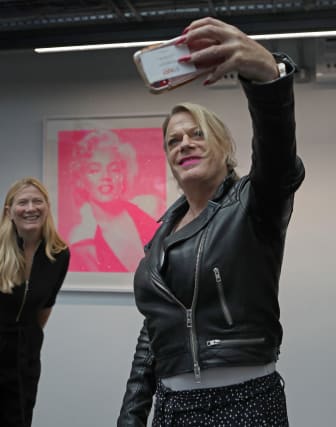 Sex Pistols drummer Paul Cook and comedian Eddie Izzard were among the famous faces who attended the launch of an exhibition exploring what it means to be an “icon”.

The Icons show, which runs until January 31 at Riverside Studios in west London, celebrates some of the famous figures associated with the arts space.

Contemporary artists including David Studwell, Lauren Baker, Mark Illuminati and Terry Pastor have all contributed works to the event.

He has contributed a shot of Bowie, titled Diamond Daydream.

Other pieces in the exhibition, a collaboration with Cambridge’s Art Hound Gallery, also depict Elvis Presley, Amy Winehouse and Diana, Princess of Wales among others.

Originally an iron works, it opened as a film studio in 1933 and produced films such as The Happiest Days Of Your Life in 1950 with Dame Margaret Rutherford and Father Brown in 1954 with Sir Alec Guinness.

In 1975, an independent trust was formed to administer the building and it became Riverside Studios.