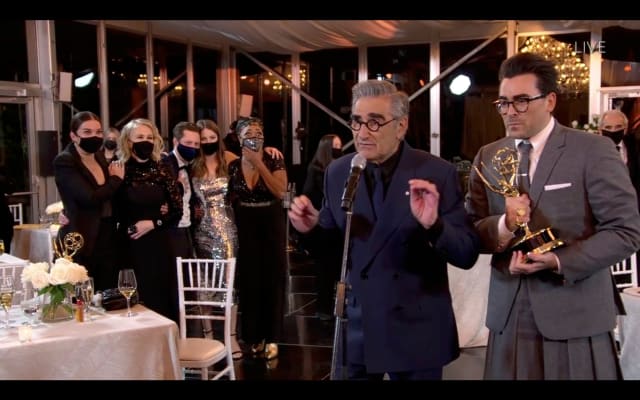 Schitt’s Creek ended earlier this year after a six-series run, but the comedy series has said farewell with a memorable 2020 Emmys haul.

During the 72nd Primetime Emmy Awards, anchored from Los Angeles by host Jimmy Kimmel on Sunday, the series was named winner of the outstanding comedy series category, with four of the cast members also taking home gongs in various acting categories.

Here’s what you need to know about Schitt’s Creek:

The series, which first aired in 2017, was written and created by Daniel Levy and his father, Eugene Levy, of American Pie fame.

Described as a reversal of fortunes story, it follows the once-wealthy Rose family who are forced to move to the fictional town of Schitt’s Creek – which they once purchased as a joke – after they lose everything.

Daniel and Eugene play father and son duo David and Johnny Rose on screen, with sister Sarah also starring in the series as waitress Twyla Sands.

2. The town of Schitt’s Creek

Forced to live in the town they once purchased as a joke, the once-wealthy Rose family move into a rundown motel, where they meet motel clerk Stevie Budd (Emily Hampshire).

Other notable characters that fans will come to meet include the town’s vet, Ted (Dustin Milligan), and Patrick Brewer (Noah Reid), who goes on to become David’s love interest.

The series has been hailed for its LGBTQ+ storylines, and Daniel, who is openly gay, recently spoke about whether he felt an expectation to tell gay stories.

In Schitt’s Creek, his character David meets the love of his life, Patrick.

Speaking on David Tennant’s podcast, he said: “The great thing about the show and what I’ve always wanted to do is just be as inclusive as I possibly can, include characters that represent my life in a way that doesn’t feel like there has to be a lesson learned.

“I think the casual nature of including people is what we need more of, just generally in television, without having to make the gay characters the butts of the jokes or the punchline.

“I will always have queer characters in whatever I continue to write because that’s important to me. It’s such a necessary conversation to have.

“People need to see themselves reflected on television screens and I think we’re realising more and more that there are so many people who have not seen themselves on television.”

During a documentary which aired earlier this year, the cast became emotional as they read a letter from mothers of LGBTQ+ children who thanked them for the series and its powerful impact.

The letter came from a Facebook page called Serendipitydodah – Home of the Mama Bears, a group for mothers of LGBTQ+ children.

In the letter, they said: “We sincerely believe that shows like Schitt’s Creek will serve as a catalyst to help change the world into a kinder, safer, more loving place for all LGBTQ people to live, and because of that, we will remain forever grateful.”

4. The series was a ‘life changer’ for Annie Murphy

The Canadian actress has earned herself a legion of fans for her role as Alexis, and notably for her phrases like “Da-v-id!” when lamenting her on-screen brother.

Earlier this year, Murphy told the PA news agency in an exclusive interview how the series had changed her life.

She explained: “I was on the verge of figuring out something else to do with my life, days before I got the audition. I had, it was a bit bleak, my apartment in Toronto had just burnt down and I had about zero dollars in the bank and I hadn’t worked in almost two years.

“I’d spent the last two years like coming very close and then being the girl that never got the phone call – it was like the universe was screaming pretty loudly to me that I should do some reconsidering, and so I was in LA and I had just blown a screen test, I had a real snotty cry in the Pacific Ocean and decided I was going to do something else.

“What that thing was I had no idea but it was going to be something else and then the next day I got the audition for Schitt’s Creek.”

Things you need to keep an eye out for during the series include Moira’s wigs and her utterly out-of-this-world wardrobe, as well as a rendition of Simply The Best that you will not forget in a hurry.

Schitt’s Creek is currently airing on Netflix in the UK.

NEWS OF THE WEEK: Kim Kardashian was warned 'not to step foot in White House' for fear of damaging reputation

NEWS OF THE WEEK: Jeff Bridges diagnosed with lymphoma