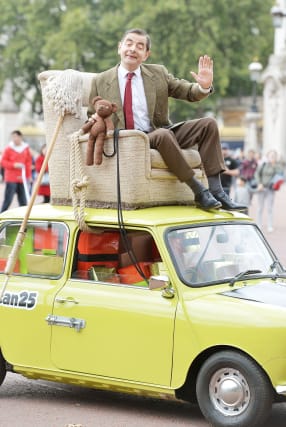 This year marks 30 years since the programme first aired on television screens.

The actor said he always thought the programme was likely to be successful because of its visual gags and Mr Bean being “essentially a child in a man’s body”.

“Across all races and cultures, the behaviour of children tends to be the same and so is easily identified and laughed at,” Atkinson said.

He added that he found filming the comedy stressful.

“I’m sorry to say that I find all filming stressful but Mr Bean filming especially so, because of the burden of responsibility I feel to make it funny,” he said.

“Of course you have support from other excellent actors but whether the jokes work or not tends to be down to me. And that’s stressful.”

Atkinson, 65, said he can “enjoy it when it’s over”, adding: “If an audience finds it funny, then it’s been worth it.”

The actor, who also starred in Blackadder, said he has “often” wished Mr Bean, who rarely speaks, would talk.

He added this is why the character talks more in Bean: The Ultimate Disaster Movie.

“We felt that he had to talk more so that we could tell the story,” Atkinson said.

He added that he finds the way Mr Bean talks amusing.

Atkinson also discussed a “crazy” signing session he took part in for Mr Bean in Amsterdam in the mid 90s.

“There were police on horseback trying to control the crowds and I was bundled out of the back door of the store into a police car,” he said.

He also revealed that Mr Bean’s Christmas episode is his favourite and that he is also especially fond of the church sketch in the comedy’s first episode.

Atkinson’s comments were issued to coincide with the date of Mr Bean’s on-screen birthday, which is on September 15.

Mr Bean first aired on ITV in 1990 and subsequently became a global hit.

Atkinson played the famous character in several films and Mr Bean has also been transformed into an animated programme.

In June the character appeared in an animated video which helped share World Health Organisation advice on coronavirus.