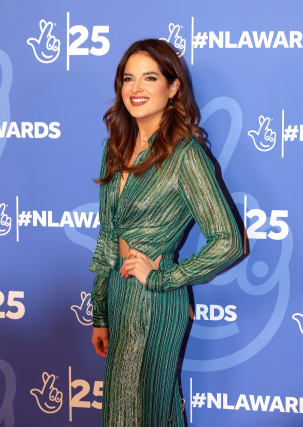 Made In Chelsea’s Binky Felstead is engaged to boyfriend Max Fredrik Darnton.

Sharing a photo of them kissing, she said: “The easiest ‘Yes’ EVER!

“On Friday morning, on their way to the duck pond, Max asked India for her permission to ask her mummy to marry him.

In a second photo, Felstead offered a closer view of the ring.

Chloe Delevingne, Georgia Jones and Rosie Fortescue were among those sending their congratulations.

He is a managing director at a global executive search and consulting firm.

They were in an on-off relationship during their time in Made In Chelsea.

Felstead recently told Hello! magazine she “wouldn’t be with” Darnton if she was not open to the idea of marrying him.

She said: “I’ve always wanted to get married, but I never minded when.

“I’ve never been one of those girls who have their picture perfect wedding in their head and know what ring they want, but it would be nice to have that one day.”

“We just got on really well and we laughed the whole time,” she added.

“He was very open and honest from the beginning.”