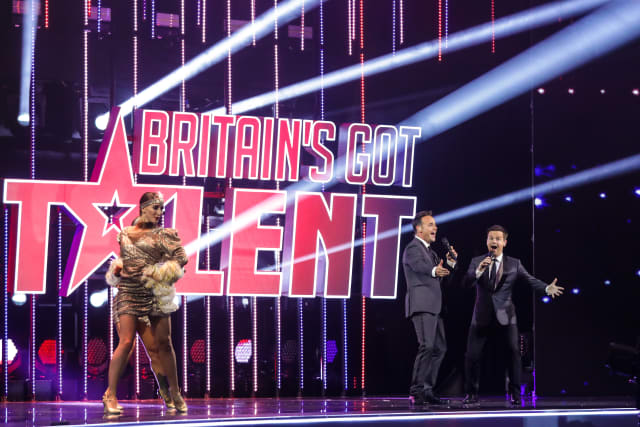 Dancers Aaron and Jasmine have secured a spot in the Britain’s Got Talent final, as the show returned for its second semi-final week.

The pair, aged 28 and 32, from London, impressed the judges with a fiery routine that combined modern Latin and ballroom.

But Holden, who is filling in as head judge in Simon Cowell’s absence, held the deciding vote.

Jasmine said: “This is the first time we have performed since our audition so we are thrilled.

“We have dedicated all our lives to this and it is so nice to share it with the world.”

The other seven competitors will now face the public vote in the hope of landing the other place.

Banjo returned for a second week on the judging panel, filling in for Cowell while he continues to recover from back surgery.

On Friday, 15,500 complaints had been made to broadcasting watchdog Ofcom over the episode.

Asked by co-host Declan Donnelly whether he enjoyed his first week as judge, Banjo said: “I loved it. I love being on this side of the desk. But you guys got me up there as well.

“So this is my first week where I am just going to be enjoying the panel on its own.”

Magician Damien O’Brien, 35, from London, impressed the judges with a series of magic tricks featuring details from their private and professional lives.

And 10-year-old Souparnika Nair, from Bury St Edmunds, sang a popular rendition of Neverland by Zendaya.

The ITV show has adapted to new coronavirus guidelines, with the judges seated at socially distanced individual desks, rather than on one long desk together.

A huge screen showed fans watching at home, in place of a live studio audience.

Special guests McFly, who recently re-formed, performed All About You and their new single Happiness backed by a choir of NHS workers.

Britain’s Got Talent continues on Saturdays at 8pm on ITV.