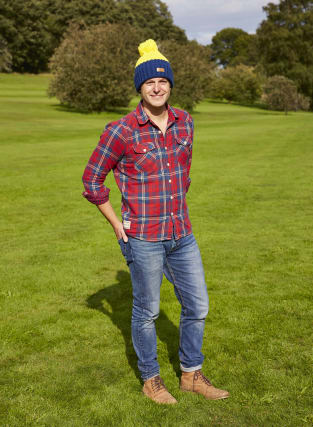 Now in its sixth year, the annual event will take place on October 10 and 11 across Cornwall, Scotland, Wales, Northern Ireland and the Cotswolds.

Organised to highlight the challenges facing disadvantaged and disabled children, the ramble has raised more than £7.9 million for BBC Children In Need since 2015.

But unlike in previous years, the rambles will be closed to the public due to Covid-19 restrictions.

Instead, viewers will be urged to embark on their own small, socially distanced rambles to raise money.

Baker will visit Cornwall where he will be joined by 16-year-old Harvey, who has been supported by Treetops Hospice Care in Derbyshire following the death of his older brother Ed in 2015.

Treetops provides one-to-one support for those affected by bereavement in a non-judgmental space.

In Scotland, Rani will be joined by 15-year-old Kim, whose eldest brother Zac has cystinosis, a genetic disorder.

Kim is supported by a BBC Children In Need-funded project run by the charity Children’s Hospice Across Scotland.

Meanwhile, Craven will stay local in Oxfordshire, where he will virtually catch up with rambles hosted by members of the public.

He said: “My fellow Countryfile presenters and I can’t wait to get rambling once again for BBC Children In Need.

“I’m proud to be a part of a show that continues to engage with some truly inspirational children and young people, who have made the Countryfile BBC Children In Need Special a yearly highlight.

“Thanks to your donations, BBC Children In Need really can make a difference to the lives of children and young people right across the UK.

“I can’t wait to see how our viewers organise and carry out their rambles, whilst bearing in mind all the strict health and safety restrictions that are in place because of Covid-19.

“I’m sure they will rise magnificently to the challenge because, however they ramble, they know that their efforts will change young lives for the better.”

Tommy Nagra, director of content for BBC Children In Need, said: “It’s great to be teaming up with the Countryfile team once again.

“We are encouraging the nation to support the charity and get safely rambling across the UK.

“Taking part in a sponsored walk or hike with friends and family really does make a difference to the children and young people we support.

“Together we can continue to be there for those who need us most, especially in these most challenging of times.”

The event will be broadcast as an extended programme, The Countryfile Ramble For BBC Children In Need, on BBC One on Sunday November 1.