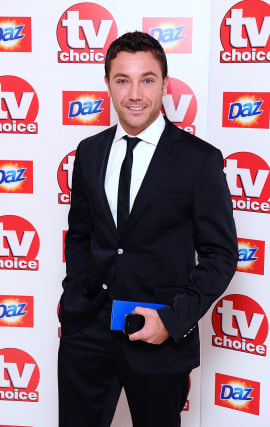 Holly Willoughby was horrified when Gino D’Acampo flashed his bottom on live television.

The celebrity chef made his return to the This Morning kitchen and did his best to distract the presenter while she told viewers what was coming up on the show.

Willoughby shrieked as D’Acampo wiggled his bottom while standing off to the side of the set next to the cameras.

Co-host Phillip Schofield said it was “exciting and frankly quite terrifying news” that D’Acampo was back on the show.

Willoughby added: “We are a little distracted because Gino has been away and he is definitely back.

“Somebody get an anti-bac wipe immediately for my eyeballs.

“That did make my jaw drop slightly. Gino, behave yourself!”

D’Acampo then bounded on to the set and returned to the kitchen to update Willoughby and Schofield on his summer in Sardinia.

The chef is known for flashing the flesh on This Morning and in 2016 cooked pasta for viewers while totally naked.

He had previously been wearing an apron and a small knitted sock in the pattern of the Italian flag but removed them over the course of the segment.