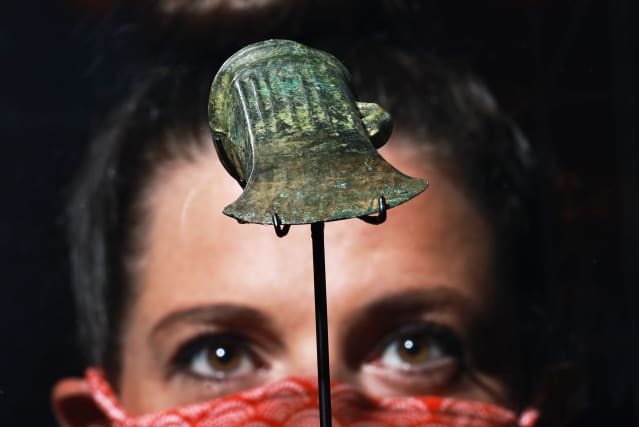 One of the largest Bronze Age hoards found in the UK – discovered near the River Thames – is going on show for the first time.

The treasure, mostly weapons and tools, was unearthed in east London by archaeology experts just as they were thinking of packing up for the day.

They came across 453 objects, in Havering, when they were asked to examine a site being developed for gravel extraction.

The find may have been a metal workers’ store, an offering to the gods, or have been kept for recycling.

Dating from between 900BC and 800BC, the “amazing discovery” goes on show at the Museum Of London Docklands, from Friday.

Many of the axe heads, spearheads, fragments of swords, daggers and knives, found in 2018, appear to be partially broken or damaged and it is not known why they were not recovered by their owners.

They “came across the most amazing discovery. It always happens this way, it’s always late, just as your thoughts are turning to going home, that the best things turn up,” she told the PA news agency.

“The digger uncovered a Bronze Age axe, which is an amazing discovery in its own right but then, as that was lifted, several more were revealed.”

She said the find builds on the “fragmentary” knowledge we have of the Bronze Age.

The objects may have been buried by rising water levels, during a then natural pattern of climate change.

The museum acquired the objects after they were declared treasure by the coroner.

It is the largest Bronze Age hoard discovered in London, and the third largest in the UK.

The exhibition starts with the moment of discovery and “will take visitors on a journey back through time to explore the mysteries, myths and realities surrounding the hoard’s burial”.

Havering Hoard: A Bronze Age Mystery runs at the Museum of London Docklands from Friday September 11 2020 to Sunday April 18 2021 and is free with a timed entry ticket to the museum.