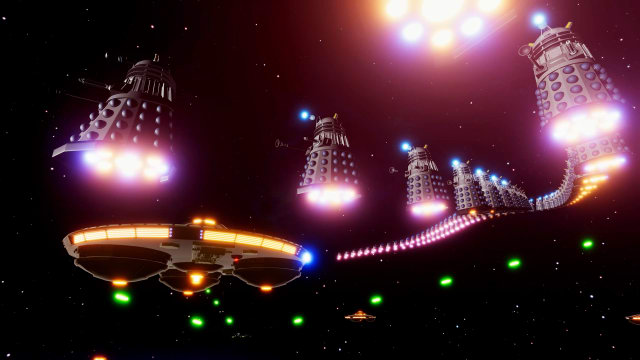 Former Strictly contestant and YouTube star Joe Sugg is joining the Doctor Who universe as the voice of a character in a new animated series.

Sugg, 29, will voice a sentinel droid in Daleks!, a five-part CGI animation which launches as part of Doctor Who: Time Lord Victorious in November this year.

Daleks! features five 10-minute animations, with a voiceover cast including Nicholas Briggs (the voice of the Daleks in the live action Doctor Who), as well as Bodyguard actress Anjli Mohindra and Holby City’s Ayesha Antoine.

Sugg told the PA news agency: “It’s quite a sassy character I think, from what I’ve seen and the way I’ve done it, he is a bit of a little sassy robot.”

The self-confessed Doctor Who fan also explained he has a long history with the popular sci-fi series.

He said: “When I was in secondary school there was a Doctor Who competition on Blue Peter, to design a Doctor Who villain. I entered it and I managed to come runner-up in that competition.

“So I’ve always been a fan of the series and it’s been around for over 50 years I think, so it’s really stood the test of time and it never disappoints.”

Daleks! will be available to watch weekly on the Doctor Who YouTube channel for free.

Briggs said: “This latest, fantastic, thrill-packed venture into the world of animation, with the Daleks as the stars of the show, is something so many of us have been craving for years.

“And for me it’s been a marvellous challenge, as usual playing every single Dalek in action, but with the added excitement of portraying some beautifully written, leading Dalek characters. It’s been a blast, and I can’t wait to see the finished production.”

Mohindra said she could not wait to sign up to the project, adding: “I had so much fun being thrown into the wonderfully weird world of remote recording and so thrilled that I was able to be part of something that feels so special!”

Antoine said: “To be a part of the animated story of these iconic baddies is really special. The recording session was a whole new adventure – another surreal moment to add to the growing list from 2020.”

Sugg rose to fame as a social media star and went on to compete on Strictly in 2018 where he reached the final of the series.

He also met his now-girlfriend, Strictly professional Dianne Buswell, whom he was partnered with on the show.