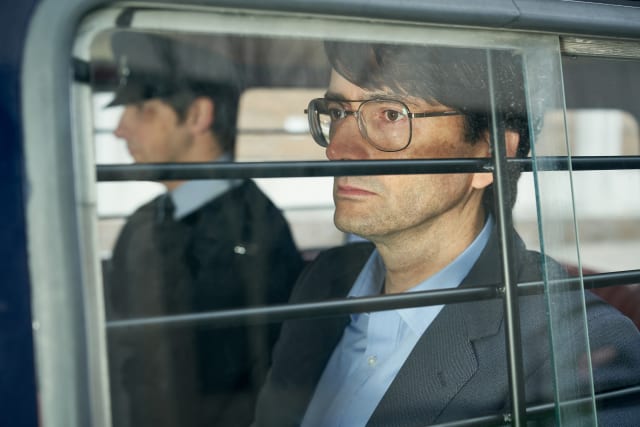 David Tennant has spoken of his relief that serial killer Dennis Nilsen is not alive to watch the forthcoming series about his arrest and trial.

The 49-year-old Doctor Who star plays Nilsen, who became known as the Muswell Hill Murderer, in ITV drama Des.

The story is told from the view of Nilsen, Detective Chief Inspector Peter Jay (played by Daniel Mays) and biographer Brian Masters (played by Jason Watkins).

Tennant said: “I think after he was arrested, one of the things that Dennis Nilsen became obsessed with was the legend of ‘Des’ and the reputation he would leave behind.

“It was his own self-publicity which is something he would come back to again and again. And even in prison, whenever he slipped out of public consciousness there was almost a sense that he wanted to get back into it.

“Which is why I’m very relieved – because when we started developing this he was still alive – I’m relieved he’s not, because I would hate for this to go out and for him to be sitting in a cell somewhere imagining that we were in any way glorifying him.

“I’m sure he would have complained about everything, but at the same time would have been rather smugly pleased that he was on television.

“So I think it’s right and proper that this is transmitting after he’s gone.”

He is believed to have killed as many as 15 young men, most of them homeless homosexuals, after luring them into his north London home.

He was jailed for life in 1983, with a recommendation that he serve a minimum of 25 years, for six counts of murder and two of attempted murder.

The three-part drama is based on material from Masters’ book Killing For Company, and covers Nilsen’s arrest and trial.

Asked if he had any reservations about playing such a “hideous” character, Tennant said: “Not with the scripts that we had, no. Because I felt that … I might have done if we were presenting some sort of Gothic horror, but we weren’t.

“We were presenting something that was a responsible look at what did and didn’t make sense when you examine an individual like this.

“So, no, I didn’t, because, from an acting point of view, these are the kind of psychologies you’re fascinated by. (It) doesn’t mean that you agree with them, or that you connect with them, but trying to unpick what went on in the mind of someone like that, it’s horrifying and it’s fascinating.”

– Des starts on ITV on Monday September 14 at 9pm.