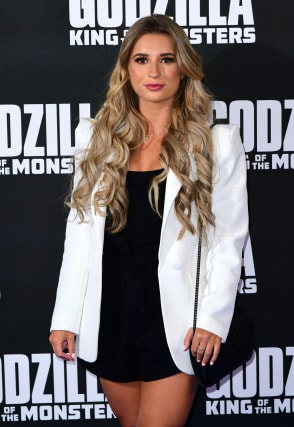 Dani Dyer has offered fans an update on her pregnancy at 19 weeks, but admitted she still does not know the sex of the child.

The 24-year-old reality TV star, who announced in July that she was expecting with boyfriend Sammy Kimmence, shared a photo of herself wearing a one-piece outfit with her baby bump on show.

Writing after attending a scan, Dyer told her 3.3 million followers: “Happy Monday everyone. On way home from seeing our little one.

“The build up to a scan is the most nerve wrecking/exciting thing, I kept seeing one magpie and it was really starting to irritate me I wanted to see 2!

“I’ve become too superstitious, can’t believe we are almost half way…

“Sammy honestly in every scan has become more and more charming to the the lady who scans us so she will tell him what the sex of baby is. ITS NOT HAPPENING!!

“Love you little one more and more everyday so glad you are healthy in there.”

The couple initially announced their happy news on Instagram with a photo of Dyer holding up a picture of a scan and Kimmence kissing her on the cheek.

She wrote: “Little bubba can’t believe you are going to be ours.

“Me and Sammy are so excited to start this next chapter in our lives, feel so lucky and grateful … 2021.”

The couple first got together before she starred on Love Island – and rekindled their romance after her split from Jack Fincham, who she won the show with.

Dyer, the daughter of EastEnders star Danny Dyer, first found fame on ITV2 reality show Survival Of The Fittest, but she was injured in the early stages of the show and had to leave early.