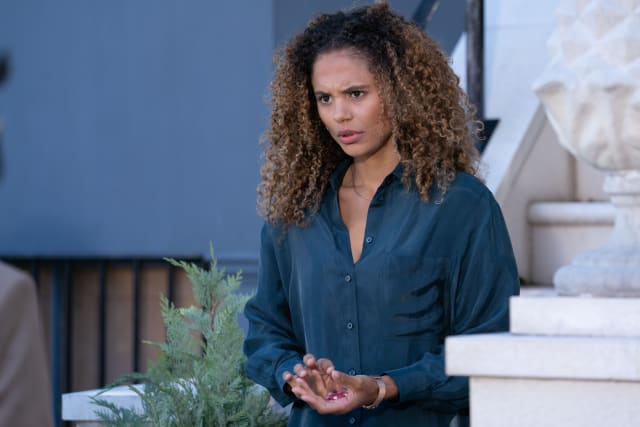 Chantelle Atkins’ domestic abuse storyline will come to a tragic end when EastEnders returns to screens on Monday after nearly three months off air.

Filming – which was paused because of coronavirus restrictions – resumed in Albert Square at the end of June.

The new episodes have been filmed with cast and crew at a social distance with the use of screens, body doubles and CGI to film intimate moments.

As the soap returns to screens, viewers will see the harrowing mental and physical abuse abuse suffered by Chantelle (Jessica Plummer) at the hands of her husband, violent and controlling Gray (Toby Alexander-Smith), has worsened throughout lockdown, with ultimately fatal consequences.

EastEnders has worked closely with Women’s Aid and Refuge on the storyline, and the soap said the prevalence of domestic abuse in society meant it was important to represent the issue as accurately as possible.

Refuge, which runs the 24-hour National Domestic Abuse Helpline, has seen calls and contact soar during the pandemic, while Women’s Aid said more than two thirds of survivors reported their domestic abuse escalating in lockdown. Other research showed more than three quarters of women living with an abuser said they felt they could not leave or get away because of the pandemic.

In the first week of July, as lockdown lifted, Refuge saw a 54% rise in women contacting its helpline needing emergency accommodation, compared with the last week in June.

This will be mirrored in Chantelle’s storyline, as she has been isolating with her husband and the show picks up as she makes the big decision to file for divorce.

After attempting to escape, she will be killed by her abuser.

Jon Sen, executive producer of the soap, said: “Chantelle’s story is such an important one to tell accurately and upon both characters’ inception we planned her tragic ending with the intention of embedding the stark reality of domestic abuse at the heart of the Atkins family.

“Being able to shed light on the realities of what goes on behind closed doors has never been more crucial given the harrowing statistics as a result of the current pandemic and hopefully Chantelle’s story will encourage people to speak out to someone they trust and get the support that they need.

“Jessica’s performance is nothing short of extraordinary and even in her final scenes, the audience will be moved by Chantelle’s strength. We’re very sorry so see Jessica go but hope that her impact on viewers is long-lasting.”

Plummer added: “It’s been such a privilege to play Chantelle and to be able to tell her story.

“Sadly what she goes through is all too common and her death is a reminder of the devastating effect of domestic abuse.

“I’ve known it wasn’t going to end well for Chantelle for a while now and although it was a shock to find out her fate, far too many men and women suffer in silence so I hope that by raising awareness we can ultimately save lives.

“I am so grateful to all the team and my lovely cast members for being so supportive, I’ll miss Albert Square!”

Lisa King of Refuge said: “The Covid-19 crisis has magnified the reality that many survivors like Chantelle face every day.

“Domestic abuse is the biggest issue affecting our society and millions of women and girls remain trapped with an abusive partner.

“Sadly, Chantelle’s murder is not an isolated incident – on average, two women a week are killed by a current or former partner in England and Wales.

“We urge anyone who has been affected by Chantelle’s story to contact Refuge’s National Domestic Abuse Helpline (0808 2000 247, www.nationaldahelpline.org.uk). No one should live in fear – you are not alone.”

EastEnders returns to BBC One on September 7 at 8.05pm and will air four nights a week.