Public surprised with performance from Royal Philharmonic Orchestra in Wembley 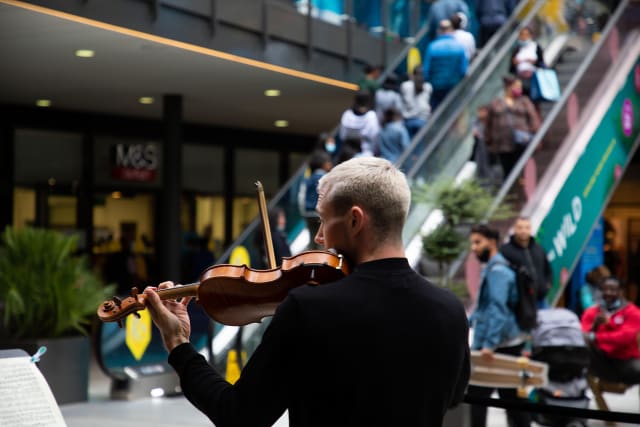 Members of the public were surprised with “much-missed” classical music when Royal Philharmonic Orchestra (RPO) gave an outdoor performance in Wembley.

The musicians got together on Saturday for their first live performance since lockdown began in March, playing spaced out in the open air to enable social distancing.

“The collaboration has enabled us to treat our community and visitors to beautiful and much-missed live orchestral music,” Wembley Park’s cultural director Josh McNorton said.

He added that the performance supported the musicians “after a long period during which they have been unable to perform to the public”.

The performance is the orchestra’s first collaboration since it was announced in 2019 that the RPO will be moving its headquarters to Wembley.

With further appearances planned on Sunday, it is expected that 38 musicians from the orchestra in total will play in the area.

“We’re thrilled that the RPO chose Wembley Park as the location to make its first public appearance since lockdown,” Mr McNorton said.

“We look forward to creating more exciting initiatives in the future as the RPO moves its headquarters here.”