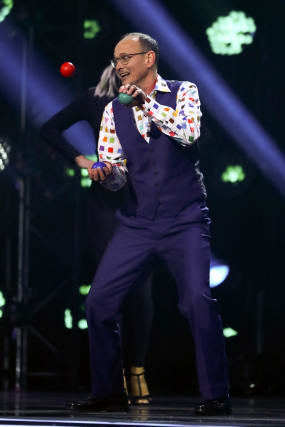 Juggling comedian Steve Royle has become the first contestant to win a place in the Britain’s Got Talent final, as the show returned to television following the coronavirus lockdown.

The comedian landed his spot after a format change meant the judges could choose one of the acts to go straight through to the final.

The other seven competitors will now face the public vote in the hope of landing the other place.

The show went on a long hiatus due to the coronavirus pandemic, and hosts Ant and Dec opened the pre-recorded show reflecting on “a strange few months” and saying how much they have missed the talent.

They then performed a musical number in which they showed off a huge screen of fans watching at home, in place of a live studio audience.

The song also introduced viewers to Diversity star Ashley Banjo, who will take Simon Cowell’s place on the judging panel while the music mogul recovers from back surgery.

Afterwards, the hosts announced there will be a format change because the show has been pre-recorded.

They also addressed how the show has adapted to new guidelines, with the judges seated at socially-distanced individual desks, rather than on one long desk together.

Amanda Holden, who will fill in as head judge in Cowell’s absence, will have the deciding vote if there is a tie each week.

The hosts also stressed all the acts would be “following Government guidelines” and said “some acts will have created bubbles especially for the show”, adding that they are in a bubble together.

Royle made it into the final after dazzling the judges with his energetic routine, which saw him walking on stage continuously dropping his juggling balls, before joking: “Hand gel, it’s ruining my career.”

Judge David Walliams told him: “I was totally wowed and if you are not in the final of Britain’s Got Talent 2020, there will be no justice.”

Alesha Dixon added: “You did not disappoint, you had me ugly laughing, you are superhuman, you are perfect at this show and I really hope you are in the final.”

Amanda Holden told him: “You are what the nation needs, I just want this for you so much because I know you have been on this road and you have honed this act over years and years.”

Meanwhile Banjo said: “It just absolutely killed me, it felt like there was a thousand people here, that is how much energy you brought.”

Afterwards Royle spoke about how difficult it has been for him to not be able to work and provide for his family during the pandemic, saying: “The last few months have been blooming hard.”

Britain’s Got Talent continues on Saturdays at 8pm on ITV.